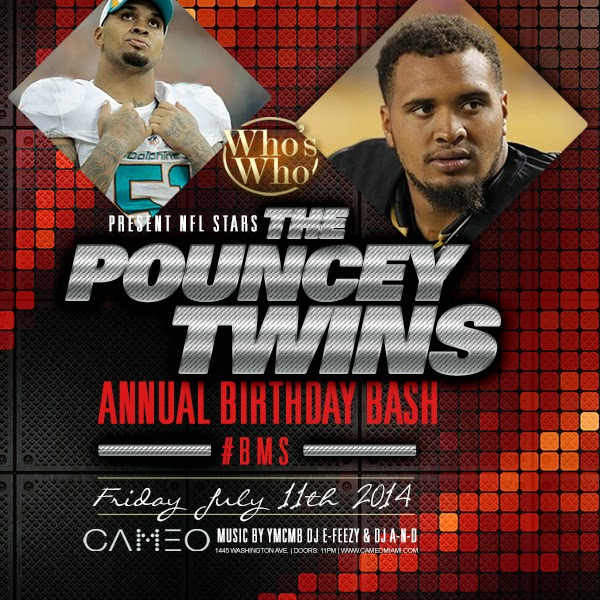 And here we thought it might be a distraction-free off-season for the Steelers.

But no-o-o-o ... the Notorious Pouncey Twins, newly empowered after signing ridiculous contract extensions: They're back in the news.

"Like a horribly gone-wrong Doublemint Gum commercial," wrote somebody identifying himself as Papa'sBasement in one of the many reader comments on this item on ProFootballTalk.com.  Lots of funny reader comments there, by the way.

Say "allegedly" all you want, but these guys just keep putting themselves in situations that call attention to themselves, and not in a good way. Not that they care.

The latest incident "allegedly" happened at 4:20 a.m. after Friday night, 7-11-14, at Cameo nightclub (open 11 p.m.-5 a.m.) in Miami's Entertainment District. Apparently it was the Pouncey Twins annual birthday bash, at least according to this promotional poster/handout and the club's promotional calendar. And that at least explains why the party wasn't held on one of the club's regular "Lapdance Tuesdays."

But on Friday night, it was the "Pouncey Twins Annual Birthday Bash," with Music by DJ E-Feezy and DJ A-N-D.

Was Johnny Manziel there?

Maybe not, but the Pouncey Brothers surely were, given that it was their "Annual Birthday Bash," which for all we know a hapless rookie offensive lineman may have been coerced and bullied into picking up the tab. Cameo (part of  The Opium Group) was the same place where the Pouncey twins were photographed with the infamous "Free Hernandez" caps at -- last year's birthday bash -- expressing their support for alleged murderer Aaron Hernandez.

All of which brings us to 4:20 a.m. Saturday morning and all of whatever it is that's going to follow in its wake. Which is probably nothing. Except more opprobrium and ugliness.

It's getting harder and harder to root for like feel halfway decent about not feel doubts about  Maurkice Pouncey. Thanks once again for making Steeler Nation proud. The world breathlessly awaits your next witty, rancid Tweet.

That recent contract extension for Maurkice Pouncey didn't feel right at the time, and feels less so now. It feels like we've said it before, but it's worth repeating in the wake of that ridiculous contract extension. Yes, "ridiculous." As in, Ridicule. Us.

Management has shown misplaced faith in some players, held on to some others for too long, given others probably too much rope, and let some others go they probably should have kept. It's that way to some extent for most teams, but the most successful teams do less of that, of course, and make adjustments along the way.

Is Maurkice Pouncey as good as he thinks he is, or as good as the long-time Steelers' braintrust have seemed to think he is? Has Pouncey ever performed as well as he did during his 2010 rookie year, when the first-round draft choice earned a spot in the Pro Bowl?

Nobody at Steelers' offices will say it publicly, of course, but many people think Pouncey is over-rated. Many more were put off by his association with alleged murderer Aaron Hernandez (including Pouncey's clueless "Free Hernandez" B.S.); antics like hosting dinner for the Miami offensive line the night before the Steelers lost to the Dolphins; and some of his Twitdiocy (Twitter Idiocy) over the past few years, including inane comments like, "I’m rich play for the steelers and have a awesome life!! Are u mad loser", which he posted shortly after the playoff loss in Denver.

And there was the Rolling Stone article.