We have to ask: Will Steeler center Maurkice Pouncey (currently on injured reserve) invite Cincinnati's offensive line over to dinner at his house on Saturday night?  ... the way he supposedly did for his twin brother Mike's team, the Dolphins, last Saturday night? ... the night before the Dolphins beat the Steelers.

At least that's what was reported here, before the supposed dinner event.

We can't help but wonder: Do you get the feeling Maurkice Pouncey would rather be with the Miami Dolphins than the Pittsburgh Steelers? He's from Florida, his twin brother plays with the Dolphins, and he could play guard just as easily as center. The twins could even wear their "Free Hernandez" hats.

And Mike's pal Richie Incognito, a guard, won't be in Miami next year, so that could open a spot at guard for Maurkice -- which is where the Steelers might consider putting him anyway. 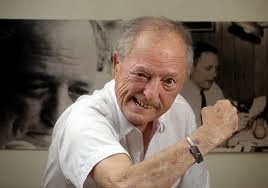 For a worthy overview of this year's Cincinnati Bengals, visit Anthony DeFeo's write-up over at Behind the Steel Curtain: "These Aren't Myron Cope's Cincy Bungals Anymore."

Maybe, but they're still the Bungles.