Where are the Linebackers?

A this point, there's no sense over-analyzing the play of the Steelers' linebackers this year. Just let's say, to be kind, that their performance has been "uneven" all season. At times, it seemed, they disappeared, and Joey Porter's Pit Bulls were screaming in dismay, "Where are the linebackers?!" 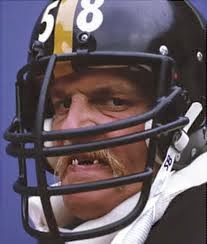 To be fair, Jason Worilds has come on strong over the past five games and has shown burst, explosiveness and playmaking ability that we saw little of during his first three seasons. Worilds has brought pressure and played well enough during this stretch that the Steelers must consider re-signing him in the off-season. It may be too late to retain Worilds, however, as greener pastures will surely beckon, just as they do every year for guys like Paul Kruger, Danell Ellerbee and Victor Butler, last year's darlings on the free-agent market.

Lawrence Timmons more or less gets a pass, although his own performance has been a bit up and down. He had a monster 17-tackle performance in the first Ravens game and 12 tackles (with a broken hand) in Oakland, but he had only five tackles last Sunday against Miami. Only five tackles from an inside linebacker isn't very good.

Overall, the performance at linebacker this year has been a problem, to say the least. So has the lack of depth, and plain talent.

Isn't there something lacking, or plain wrong, when Troy Polamalu is lined up linebacker a bit too often? There sure was last Sunday, when Polamalu was late moving laterally and got crushed on a block that helped free running back Daniel Thomas for his 55-yard run late in the fourth quarter.


"No, I didn't do my job there,'' Polamalu said. "I miss-fit it. I just miss-fit it. A miss-fit is not fit. No, I just didn't get over to my gap. I was supposed to be on his other shoulder. (The big plays) are very frustrating, but I don't know if surprised is a proper word for it. I've been on defenses that really have made their money on now allowing them at all or one in a season or two in a season.

That quote came from Dale Grdinic's fine write-up here over at Behind the Steel Curtain, profiling Polamalu's dual role at safety and linebacker this season.

Schematically, it may make sense for Polamalu to bring his special skills to the linebacker position for some plays, but he was positioned at linebacker for about 50 percent of the snaps against Miami. That means two things: (1) When at linebacker, he's not roaming on the back end as a safety; and (2) He wouldn't even be at linebacker if the Steelers had anybody else capable of doing it.  Larry Foote is on injured reserve, and nobody else at this point is either good enough or healthy enough to do the job.

One reason Polamalu has had to play so much at linebacker is the lack of progress (or talent) from some of the younger guys. Rookie sixth-rounder Vince Williams has played like a rookie sixth-rounder. He's shown some potential to be a thumper, maybe, but he's already lost, at least temporarily, his short-lived opportunity to seize the starter's job because he got caught out of position too often and was generally so slow that he was a real detriment. Just as crucially, he didn't show that he can cover receivers, and that's a problem in a passing league. He could develop, but he's not ready yet.

Neither is rookie first-rounder Jarvis Jones. He's played small, and he looks small, which has been a concern from the very first day we saw him at mini-camp. Jones has shown flashes at times, but at this point, he looks like "just a guy," and one with a 4.92 40 time. Small and slow is not what the Steelers need from their prize first-round draft choice. They need him to make an impact.

Undrafted free agent Terence Garvin hasn't gotten on the field a whole lot, but he may be the most impressive, so far, of the three rookies. He's relatively light but rangy and fast, and he's shown playmaking instincts in small sample sizes. There may be a place for him.

The other backups, Kion Wilson and Stevenson Sylvester, are hanging on as fringe players. Each is "just a guy."  Neither was able to seize the opportunity to nail down playing time once they had their opportunity. Injured Sean Spence may never see the field, as he is still recovering from the massive knee injury he suffered in his rookie training camp. Chris Carter has been a non-factor since he arrived in 2011.

Whither Woodley?
And that, finally, brings us to the Big Kahuna, the highest-paid linebacker on the team, LaMarr Woodley. Before getting hurt and missing three games before Miami, Woodley was leading the team in sacks with five, but he's had only 36 tackles (20 solo) in the 10 games he's played this year.

This year, there have been four games Woodley has registered zero tackles. ZERO. He didn't even get in on any assisted tackles. Four games with ZERO tackles. Those four games were Baltimore, Cleveland, Detroit and Oakland.

The best you could say about Woodley's performance is that it has been sporadically okay -- but he hasn't been the linebacker who showed enough a few years ago that the Steelers signed him to a $61.5 million contract. He's been injury prone ever since signing that deal and just not as productive as he was for about two years beforehand, when he was an absolute beast as the bookend opposite James Harrison.

Joey Porter's Pit Bulls don't necessarily agree with people who say that Woodley got "fat and happy" -- and out of shape-- after signing that deal.  Yet the production and the impact hasn't been there, although he entered this season apparently determined to show otherwise.

Columnist Dejean Kovacevic noted the following about LaMarr Woodley and his performance during last Sunday's game vs. the Dolphins:


LaMarr Woodley lost his spot at left outside linebacker in being shifted to the right for Jason Worilds, already humbling for a $61.5 million player, then turned in a total of three tackles and zero QB hits from the right.

“I think it worked out pretty good,” Woodley said, oblivious as ever to his own shortcomings.

"Oblivious as ever to his own shortcomings." Ouch. Well, that's Kovacevic's comment, not ours. But the fact that comments like that are out there, well, they wouldn't be out there if Woodley didn't invite them.

Woodley had zero tackles in the loss at Oakland, and afterwards had some interesting comments, as noted in the following excerpt of a column by the Post-Gazette's Gene Collier (with the bold-faced emphasis below courtesy of yours truly):


"This is no step back for us; we're still movin' forward," said linebacker LaMarr Woodley, whose movements seemed almost designed to avoid tackles in a 21-18 loss to an almost equally dreadful football team. "We just had some mistakes out there and the Raiders capitalized on it. So, we're still a good football team, but we gave up some big plays. That's the only thing you can really look back on. You gave up some big plays. I wouldn't question us as a football team."

If the Steelers really want to retain Jason Worilds next year, that may require applying the franchise tag on him. And that would require jettisoning some other big contracts, one of which might be Woodley's.

There almost certainly will be others, and we wonder if Maurkice Pouncey's name is one of the ones being bandied about in Steeler offices on the South Side. Woodley and Pouncey would land elsewhere, of course, and possibly do well.  Yet the Steelers may need to free up cap space, and those would be two candidates that will bear scrutiny, among others (Ike Taylor, Troy Polamalu, Levi Brown, Matt Spaeth, etc.)

They're not the only players with big cap numbers, but Woodley's will be the second-largest on the team (behind Ben Roethlisberger), and the Steelers may consider moving Maurkice Pouncey in a trade for badly needed draft picks, considering they've already traded their 2014 third-round choice to Cleveland and will be docked a later-round pick because of Mike Tomlin's sideline antics in Baltimore. Naturally, however, before moving Pouncey, the Steelers would need to feel comfortable they have a satisfactory replacement for him.

Anything's a possibility. One thing's for sure: They need improved play at linebacker.
Posted by Joey Porter’s Pit Bulls at Saturday, December 14, 2013