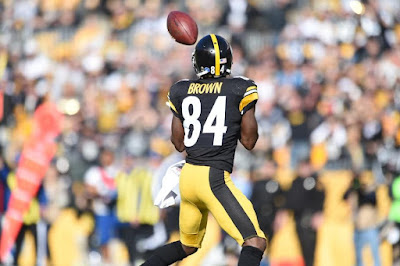 Now that was a shootout.

Big Ben looked good passing the ball for 334 yards (despite at least five early drops by intended receivers) before his latest injury, which is a problem. Yet another challenge.

Roethlisberger's injury presents another opportunity, you might say, for Landry Jones to show what he's got.  Jones hit Antonio Brown on the final drive for the pivotal 57-yard gain that put Chris Boswell in position to kick the game-winning field goal, even if it was about a 10-yard pass and 47 yards after the catch. That's okay. Got the job done. Whatever it takes.

No disrespect, but ... Kerry Collins? Ahead of Joe Montana? What is wrong with this picture?

Footnote No. 2: Anybody else notice that Cam Thomas didn't play? No? He was not on the "inactive" list, but he didn't play, meaning he contributed about as much as usually does. And maybe more so.

Footnote No. 3: Jacoby Jones didn't do so well.  He managed two punt returns for one yard. Four kickoff returns for an average of 20.8 yards per return. Not good.

Official Gamebook may be found here.