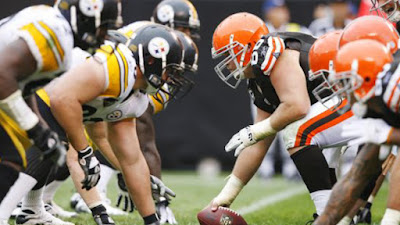 It's Browns Week. Always reason to get up for this one.


With the 2-7 Browns coming to Heinz Field, we'll see if Mike Tomlin continues his penchant for losing to bad teams quarterbacked by crummy QBs led by lousy coaches.

Make no mistake about it: The Browns are a bad team, just as they were last season, when Mike Pettine's squad embarrassed Tomlin's team in Cleveland, 31-10.

Cleveland's Defense is Awful
This year, Cleveland ranks dead last (32nd) in rushing defense, surrendering a whopping 147.6 yards rushing per game, including 11 runs of 20 yards per more and four runs of at least 40 yards. Cleveland has yielded nine touchdowns on the ground.  By comparison, the middling Steelers' run defense, ranked 12th in the NFL, has surrendered 101.7 yards per game on the ground and three touchdowns.

Bigger picture, Cleveland's defense has surrendered 401.6 total yards per game (29th in the NFL) and 27.4 points per game (26th). They've allowed at least 30 points to five of their nine opponents.

Nine games into the season, Cleveland has allowed 18 passing TDs but  tallied just 15 sacks, seven of which were put down in just one game, vs. the woeful Titans.

With just five interceptions (and just two INTs over the past seven weeks), the Browns' secondary today will be without their star cornerback (Joe Haden) and most experienced, hardest-hitting safety (Donte Whitner). Their secondary has allowed nine pass plays of more than 40 yards. The Browns have been outscored by 53 points their last three games.

It's a bad defense.
It's almost as bad on offense. Their running game has been limp, ranking 31st in the NFL at just 82.3 yards per game and 3.5 yards per carry, with only two rushing touchdowns but four fumbles. Twice as many fumbles as rushing touchdowns.

Instead, the Steelers will face the reckless, feckless and immature party boy, Johnny Manziel, who, on the field, is skittish, manic, diminutive and inaccurate. Johnny Manziel? Puh-lease.

If Mike Tomlin's Steelers lose today, at home, to this edition of the Cleveland Browns ... no, that just cannot happen. Can it?