The Browns are Clowns 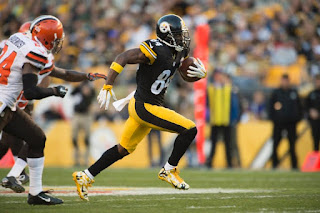 Following one of the most rousing renditions of the National Anthem by singer Robert Roundlee, the Steelers put on a pretty rousing performance themselves, led by Ben Roethlisberger and Antonio Brown, and the Cleveland Browns were, well, particularly Browns-like.

They were Brown as Browns can be, with Johnny Manziel's early squirt-up fumble setting the tone, followed by numerous other Keystone Kops-like moments en route to a thorough pummeling that was maybe closer than the score indicated but sure didn't feel like it. 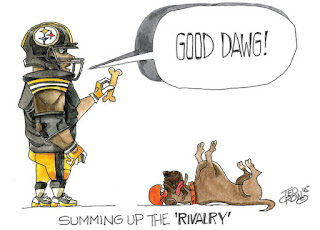 Johnny Manziel somehow passed for 372 yards and one touchdown despite his early pop-up fumble, a later interception, and enduring six sacks.  He did some good things, but the Browns as a whole did some very Browns-like things:  Lots of penalties (12 of 'em, to be precise, for a whopping 188 yards), some of them stupid (two on the same play, twice) and utterly Browns-like -- including back-to-back pass interference penalties for 39 and 38 yards -- and numerous other unforced mistakes. They had an unbelievable 173 more penalty yards than rushing yards (15). And, of course, there was that preposterous sequence in the fourth quarter when the Browns had a first-and-goal from inside the Pittsburgh one-yard-line. What followed were a holding penalty, a sack, an illegal formation penalty and an interception. Quintessential Browns.

The Steelers have defeated the Browns 28 of 34 times since Cleveland re-entered the NFL in 1999.  With Cleveland having lost five straight and now just 2-13 in its last 15 games under head coach Mike Pettine, could Browns owner Jimmy Haslam be contemplating change in the coaching ranks?  Haslam denies it, but anything's possible in that mess of an organization.