Blame it on Michael Vick

Yeah, we know. He didn't play.  But. The bad karma continues.

The big story of the day, of course, was the loss of Le'Veon Bell to what is being reported as a season-ending knee injury (torn MCL). What a bummer. The game's best running back. Done for the year. Get well, Le'Veon.

Even as the bad karma continues, so does the uneven quality of play across the NFL ... way too much bad football, a sloppy, shoddy, spotty mess: the continuous rain of yellow flags; the indecipherable rules; the injuries; and the constant, interminable interruptions for commercial TV breaks. Roger Goodell's NFL is just about unwatchable anymore. But still we do. Watch it, that is. Although, there are plenty of other things to do, Roger. 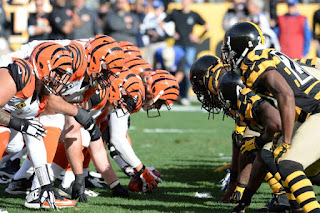 With a 4-4 record halfway through the season -- and all four losses to AFC teams -- Mike Tomlin's Steelers have the look of a .500 team that may not make the playoffs.

The Rain of Yellow Flags
Last week at Kansas City, one big issue for the Steelers was missed tackles. This week at Heinz Field, it was penalties: 10 of them, to be precise, for 91 yards, not to mention a couple that were declined, for good measure. Those 10 penalties hurt flow and compromised field position, never mind that the Bengals also incurred 10 penalties (for 94 yards).

The 10 penalties the Steelers incurred were on them, and they hurt.

We have to question the play calling on the fourth-quarter pick by third-year safety Shawn Williams on the sideline in front of Will Johnson. It's easy to question Roethlisberger's decision-making and execution there, too, but the play call there makes you wonder why that play-call was even made there, with 5:45 left on the clock.


If the excuse was, "no Le'Veon Bell," then what happened to the "next man up" mantra? Those are questions for Mike Tomlin, Todd Haley and Ben Roethlisberger, the latter of whom was quick to take the blame for the loss. But, still.

The coaching, the play-calling, the continued mismanagement of the clock ... that's on Tomlin, first and foremost, although he will never admit to it.


Roethlisberger's been a stand-up guy in recent years when it comes to mea culpas. He is often the first to take blame, even when it's not necessarily deserved. This time, his self-criticism is spot-on, as his fourth-quarter unraveled with two interceptions, two short drives that ended in punts and a pass overthrown, out of the back of the end zone, as the game clock ran out. Still, a few of those 38 seconds would have helped there at the end, eh Coach Tomlin?

The National Passing League
On the game's first drive, Roethlisberger surpassed 40,000 yards passing for his career, making him just the ninth quarterback in NFL history to reach that milestone.  FIVE of those quarterbacks are currently active, which tells you all you need to know about how the National Football League has devolved into the "National Passing League."

The other four active QBs are Peyton Manning, Drew Brees, Tom Brady and Eli Manning. How the game has changed in recent years. If I had to guess, without bothering to look up the names of the previous four, I'd venture the names of Tarkenton, Marino, Elway and Favre.

Other Notes
The Steelers will supposedly bring in former second-rounder Isaiah Pead, who was recently cut by the St. Louis Rams after missing most of 2014 with a knee injury.