It was only on Dec. 7th that the Steelers defeated the Cincinnati Bengals, 42-21, at Paul Brown Stadium. It seems long ago, however, and it feels like a lot has happened since then. 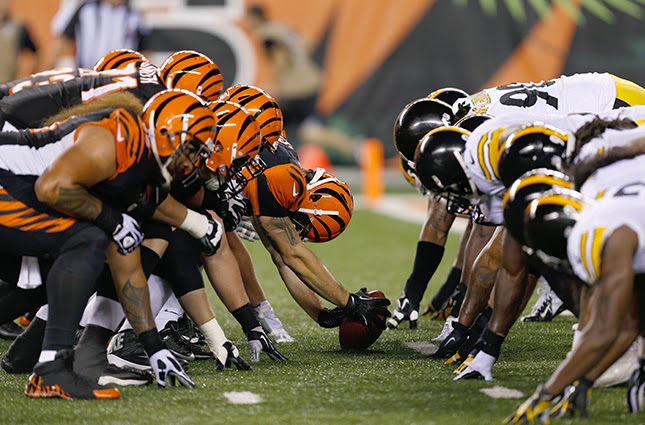 That win was the first of a three-game resurgence that has the Steelers on the verge of winning the AFC North Division title -- if the Steelers can defeat the Bengals again at Heinz Field on Sunday night.

Since that Dec. 7th win in Cincinnati, the Steelers beat the Falcons in Atlanta, 27-20, and the Chiefs in Pittsburgh, 20-12. The Bengals demolished the Johnny Manziel-led Browns, 30-0, in Cleveland, and beat the Peyton Manning-led Broncos, 37-28, in Cincinnati on a rain-slogged Monday night.

Reviewing the arc of this season's trajectory, the Steelers seem to have solidified their game following what had been an uneven, up-and-down pattern leading to the Dec. 7th game in Cincinnati. A few weeks before that, it's fair to say that after the Steelers had hit their high-water mark of the season with lopsided wins over the Colts and Ravens, in which Ben Roethlisberger shredded the record books.

Then, the Steelers went into a down phase for the four weeks between those two victories and that key win over the Bengals.  In those four weeks, the Steelers: (1) lost to the woebegone New York Jets; (2) eked out a 27-24 win over the dreadful Tennessee Titans; (3) had a bye week; and (4) coming off the bye week, looked flat and unprepared as they lost, 35-32, to a bad New Orleans Saints team at Heinz Field.

It was at that point that Joey Porter's Pit Bulls said, "Stick a fork in 'em; they're done." To the Steelers' credit, however, they weren't done, and we are very happy about that.

The resurgence started with the win over Cincinnati, which was a game the Bengals knew that if they won, they would have buried the Steelers right then and there.

Instead, the Steelers' Le'Veon Bell ran for 185 yards and 7.1 yards per carry. Ben Roethlisberger, hampered by some sort of hand or wrist injury, often lined up in the short shotgun (pistol) formation with Bell behind him. And the Steelers repeatedly ran the counter sweep with David DeCastro and Maurkice Pouncey pulling behind Heath Miller and/or Matt Spaeth to clear lanes for Bell to find open lanes or simply trample Bengals defenders.

It was a good formula, and it worked well.  Whether they Steelers will reprise that game plan remains to be seen.

One thing we can count on with some reasonable of assurance, is that the Bengals will most definitely not use the same offensive game plan they employed vs. the Steelers the first time around.

In that Dec. 7th meeting, Bengals running backs Jeremy Hill and Giovanni Bernard combined for just 14 carries, with Hill gaining only 46 yards on eight carries. This, despite Cincinnati offensive coordinator Hue Jackson adamantly insisting all during training camp that the Bengals were "committed to the run." Fourteen carries is not "committed to the run." The Steelers won by 21 points.

Since then, however, the Bengals have shown more consistency and commitment running the ball with regularity and success. Jeremy Hill has gotten the bulk of the carries, and he racked up 147 yards on the ground vs. Cleveland.

Now averaging 5.1 yards per carry for the season, the rookie from LSU also ran for 146 yards, including an 85-yard dash, on Monday night vs. the Broncos.

That last performance was the fourth time this year that Hill racked up at least 140 yards rushing, making him only the third rookie in NFL history to do that. He's making a case for Rookie of the Year.

We can expect to see a lot of Hill and Bernard on Sunday night.