You'd think, hope and expect the Steelers will be ready to start the 2014 season today. At home. Versus the stinking Cleveland Browns, the Black 'n Gold's historical and geographical arch-rival, never mind the 24-4 record vs. the Browns since 2000.

The Steelers should stomp this team.

Then again, you'd think the Steelers would have been ready to open the season in 2013. At home. Versus a mediocre Tennessee Titans team that had no business coming into Pittsburgh and beating the Steelers.

The concern for today's game, though, goes back to last year. There's no disputing the Steelers weren't ready for the 2013 season. They went 0-4 to start the regular season.

And the Steelers didn't look particularly crisp this pre-season.

The Browns have been worse than the Steelers in season openers. In fact, the Browns have lost nine season openers in a row. When they lose their 10th today, it will set an NFL record. For what it's worth, Vic Carucci on the Browns' website noted, "the last time the Browns began a season in Pittsburgh, 1989, they also had a first-year head coach in Bud Carson. They won, 51-0. "

On the other hand, Mike Pettine, Cleveland's rookie head coach, surely is aware that the last seven Browns head coaches have lost their debut with Cleveland. 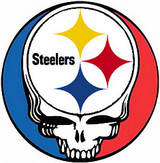 On offense, the Steelers would do well to score early and force the Browns to play catch-up, on the road in a noisy, hostile environment, with a new coaching staff and a squad comprised of 12 rookies, 23 undrafted free agents, numerous first-time starters, and a whopping 26 players who weren't on Cleveland's roster at the end of last season.

The Steelers can and should win this game ... IF Mike Tomlin has them ready this time around.
Posted by Joey Porter’s Pit Bulls at Sunday, September 07, 2014