STOMP, Stomped, and then a Win. "Obviously."

The final score almost doesn't matter.  Yes, it was a win, thankfully, but the second half is pretty much all anybody will talk about, and it was alarming. As ESPN.com's Scott Brown wrote, "The Steelers were unstoppable in the first half and unwatchable in the second half."

Final score: 30-27, in favor of the Steelers, but ... mistakes, 11 penalties, poor choices, plays allowed and plays not made, including Ike Taylor's trademarked interception-drop to be followed by an opponent's touchdown a few plays later.

It almost doesn't matter what the Steelers did in the first half. They stunk up their own stadium in the second half. The defense let the Cleveland Stinking Browns come back from a 24-point halftime deficit. That was Disgusting.

In some positions, however, maybe the Steelers just don't have the right talent. The front office gave contract extensions to Cortez Allen (why?), Maurkice Pouncey (?) and Marcus Gilbert (??). The offensive line anchored by Pouncey and Gilbert allowed four sacks, which is too many. "Obviously."

Let's see, four sacks a game for 16 games = 60 sacks. Obviously. Numbers like that rarely extrapolate so neatly, but, still, the idea is to protect Ben, isn't it? 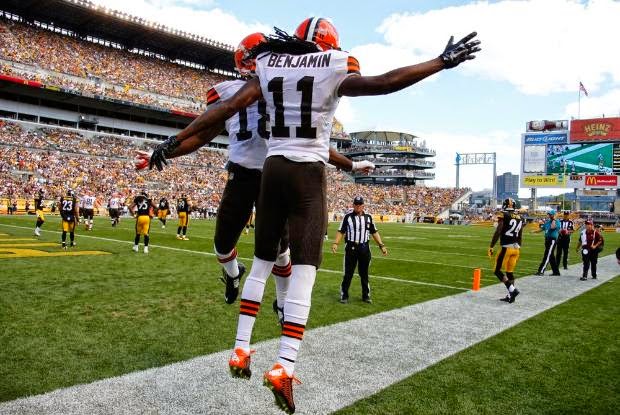 And the defense? Ugh. In Joey Porter's Pit Bulls' posts during the week before the game, it was noted the Steelers must stop the run. They didn't.

Allowing 183 yards on the ground is unacceptable by anybody's criteria.

Backup and no-name receivers running free made us wonder why Cortez Allen got an extension.

And, we have to ask, where was Mike Mitchell, the big-money free agent safety? He was in on seven tackles, but if anybody thinks he had anything resembling a good game, uh, no. Same goes for Ike Taylor, Jason Worilds, Cam Thomas and Steve McClendon.

Each of the linebackers had at least one good, noteworthy play, but there were plays and tackles left unmade, and that was obvious by the numbers.

The Steelers had better get their act together by Thursday.

Next game: Thursday night in Baltimore vs. the Ravens, who clearly have problems of their own.