Browns Week: With Baltimore looming, let's not look past the Browns, although they stink

As bad as the Browns have been in recent years and, more crucially, with Game 2 vs. Baltimore looming just four days after the season opener vs. Cleveland, let's all hope that nobody on the Steelers is looking past the Browns, as incredible and absurd as that sounds for a home opener vs. the team's historical and geographical rival.

The Steelers have lost their past three season openers, however, and came out flat last year in their loss to the Titans at Heinz Field.  If there was ever a team to stomp, it is this year's Browns.

The Browns have been a rolling clown car of a franchise for quite a while now and this past off-season in particular.  Their quarterback situation has received so much focus, it's easy to overlook some of their better attributes. Their defense was in the NFL's top 10 last year. The offensive line is anchored by two Pro Bowlers, tackle Joe Thomas and center Alex Mack. Their running game could be good. Tight end Jordan Cameron is a Pro Bowler and is a capable receiving threat.

Their wide receivers, though, are question marks, and some observers have derided this corps as the worst receiver group in the NFL. Starters Miles Austin and Andrew Hawkins have had some success in the NFL, but Austin has been slowed by injuries the past couple of years, and Hawkins has always played in the slot.  He will start on the outside for the Browns. The third receiver, Travis Benjamin, is a smallish, pure speedster (4.29) who is coming off a year lost to an ACL. He has mostly specialized in kick/punt returns. He will get some snaps at wide receiver, but Hawkins is their most dangerous receiver right now.

One thing about the pre-season games: The Browns' quarterbacks, Brian Hoyer and Johnny Manziel, took almost no shots downfield.  We're not sure they can. Neither have cannon arms, and Cleveland's scheme may not be set up for long downfield passes.  That's the perception, anyway, as most observers assume the Browns will rely mostly on their running game and quick, relatively safe passes to sustain drives and eat up the clock. They'll try to and avoid sacks and turnovers, which could be a real bugaboo for the Browns this year, given their QBs.

Offensive coordinator Kyle Shanahan is aware of all this, of course, and Joey Porter's Pit Bulls expect that he will indeed have Hoyer try to get the ball to Hawkins, occasionally. The 5'7" Hawkins (a Johnstown, Pa. native) is one of those quick, slippery, nimble guys with short strides and a good, explosive first step. Whether he has long speed? Maybe. Whether he can battle a cornerback all the way downfield and out-jump or battle for a long pass is another thing. He is, after all, just 5'7" tall. 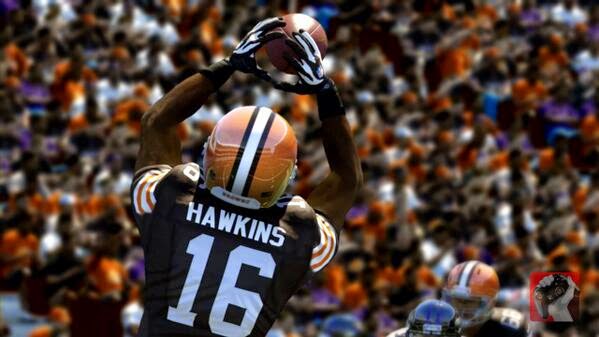 “You need a lot of speed to play outside,” Shanahan said of Hawkins. “He’s got the speed. You’ve got to have quickness to play inside. He’s got the quickness.

Shanahan continued: "You can’t just go out and run, run, pass every play. I don’t think you’re going to do well. The key to this league is keeping defenses off balance. If you’re one dimensional – I don’t care how good you are in that dimension – defenses will find a way to stop you. The players are too good. The coaches are too good. You have to do everything.”

Whether the Browns can do everything isn't what they should be worrying about. It's whether they can do anything.