What do we have in Markus Wheaton? 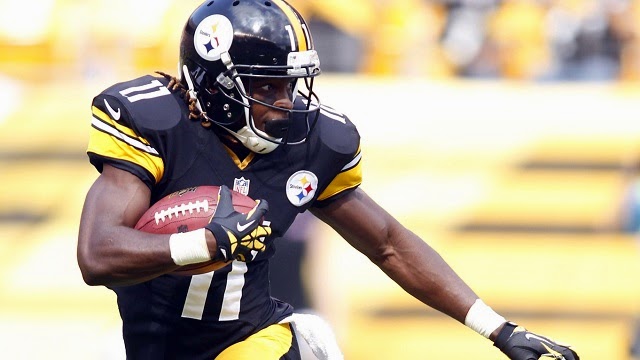 Markus Levont`e Wheaton, the 2013 third-round draft pick out of Oregon State, is being counted on to replace Emmanuel Sanders at the No. 2 wide receiver this year on the Steelers.

Sanders set a fairly low bar for performance. His drops came at crucial times -- remember the dropped two-point conversion on Thanksgiving night vs. Baltimore? ... the nail-in-the-coffin loss when he choked repeatedly, dropping several passes, as noted the next day on this blog:

If the definition of "clutch" is to thrive and get better in the bigger moments, Sanders ain't clutch."

Points reiterated over at Behind the Steel Curtain:


"Wide receiver Emmanuel Sanders choked throughout the game, dropping several passes, including a two-point conversion with a minute and change left on the clock that would have tied the game."

For all his shortcomings, Sanders was slippery, showed some flash on occasion and came up with enough catches to end up with 67 receptions in 2013 for a pedestrian 11-yards-per catch average (740 yards), a long catch of 55 yards for a TD, six touchdowns, 12 catches of 20 yards or more, three catches of 40 yards-plus. He had 10 kick returns for a very decent 28.6 yard average, with the longest return being 46 yards.

Sanders is gone, now, of course, having departed via free agency for the Denver Broncos. No surprise. As Scott Brown at ESPN noted before the last game of the 2013 season, "Sanders' well-documented drops have raised questions about his consistency, and his high opinion of his skills will price him out of the Steelers' range if another team agrees with him."

In 2014, with Sanders gone and with Dri Archer returning kicks, all Markus Wheaton has to do is catch passes. Will he be able to replace Sanders's production? Very possibly.

Let's take a closer comparative look.  Sanders and Wheaton have similar size. According to the official team numbers, Sanders was listed at 5'11, 180. Wheaton is listed at 5'11, 182. Subtract an inch and about 10 pounds, and you're probably close their real height and weight.

Sanders was a third-rounder out of Southern Methodist in 2010 (82nd overall). Joey Porter's Pit Bulls remember watching pre-draft video of some of his play at SMU and being impressed. He seemed polished, and he had put up numbers in a pass-happy offense. His speed was plenty good enough (4.40 40).

Wheaton was a third-rounder out of Oregon State in 2013 (79th overall). He came out of a pass-happy offense at Oregon State. He also put up good numbers, and his speed (a 4.45 40) is good enough to have success in the NFL. At Oregon State, Wheaton caught 227 passes for 2,994 yards and 16 touchdowns. That's college, though.

When he got to training camp with the Steelers last year, by all accounts, Wheaton looked very good. He showed polish and a professional approach to the game. During training camp last August, Ike Taylor famously said that Wheaton was already a better wide receiver than Mike Wallace -- just not as fast as Wallace.


"He's not playing like a rookie, he doesn't act like a rookie," Taylor said. "Of course, he's going to make rookie mistakes because he is a rookie, but watching him over the course of weeks, the guy is smart, polished. I can't wait to see him during the season."

That didn't happen much, mostly due to a broken finger that curtailed Wheaton's playing time and production.

This year, for all intents and purposes, the Steelers are adding a third-round wider receiver ... just one that was drafted a year ago. One plus is that he has a year being around the Steelers, studying and working with the coaches and other receivers.

Now healthy again, presumably, the questions for Markus Wheaton in 2014 are: Will he get open? And will he catch the ball?

To find the answers, we can go back to look at some of the things that got people excited last training camp. A nice report from Behind the Steel Curtain's Neal Coolong, offered at this link, pores over details of some plays he made at Oregon State, and they show a workmanlike approach and attention to detail that bodes well for success at the pro level. Doing it against UCLA is one thing, of course; doing it against the Ravens is another.

So, back to our original question: What do we have in Markus Wheaton?

Joey Porter's Pit Bulls would like to believe we have reason to be cautiously-hopefully optimistic that Wheaton is a guy who will do well enough to make us forget the high hopes we once had for Emmanuel Sanders, and his disappointing drops, as well.

Wheaton is neither Emmanuel Sanders nor Mike Wallace, and we'll take that as a potentially good thing.