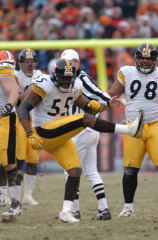 Joey Porter said those words about the Seattle Seahawks the week before the Super Bowl in February 2006.

Porter had kept a low profile until that point but erupted after he learned that Seattle tight end Jerramy Stevens had mouthed off about the Seahawks planning to spoil Jerome Bettis's Detroit homecoming and appearance in the first Super Bowl of his long and distinguished career.

Upon hearing Stevens's remarks, Porter could contain himself no longer. He erupted, calling Stevens "soft."

Porter went on: "I don't think he should even be talking about a guy of Jerome's status. This is a guy who hasn't done nothing yet.

"If they ever leave him in to pass block, he's definitely a liability. If they want him to play to my side, him being the tight end, to block me, he's a liability. If they do anything using him to make a play coming to my side, it's not going to work, I'll tell you that right now. If they run the ball with him trying to block me, it's not going to happen. If they leave him in to pass block against me, I'm going to hit their quarterback. Those are the facts."