Detroit is a great city, but man has it had some tough times. Just like Pittsburgh.

Musically, if Motown is historically a soul city, "Pittsburgh is a blues city," as keyboardist Mike Finnigan of Bonnie Raitt's band pronounced at Heinz Hall in Pittsburgh on Monday night during an astoundingly superb concert performance by Ms. Raitt.*

And, if any city has a bigger inferiority complex than Pittsburgh, it may be Detroit, with its notorious bankruptcy, miles of blight, violent crime, arson contagion, rampant unemployment, corrupt politicians, crumbling infrastructure, and so on. 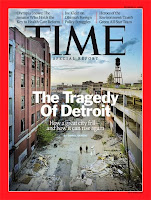 Just this week, Detroit's perceived inferiority hit the news when Lions players got defensive about verbal jabs from Chicago Bears wide receiver Brandon Marshall, who patronizingly described the Lions and the city of Detroit as "Chicago's little brother." Ouch, never mind that the Lions have beaten the Bears twice this season.

Well, even little brothers grow up, as Lions running back Reggie Bush jabbed back, and the Lions are representing the Motor City reasonably well this year. They sit atop an NFC Central Division that features the struggling and injury-decimated Packers, the disappointing Bears and the absolutely dreadful Vikings, who managed to beat the Steelers.

Quarterback Matt Stafford's selection as the No. 1 overall choice in the 2009 NFL draft seemed a stretch at the time, and he has had spotty success throughout his four years. He has a big arm and a smooth throwing motion. The ball just zips out of Stafford's hand, laser-like when he needs it but with an arc and touch when he needs that.

Stafford has limited mobility, though, and he's been a bit injury-prone (what QB isn't injury-prone?).  Still, Stafford's been sacked only 10 times this year. Rookie guard Larry Warford (out of Kentucky) has helped solidify the offensive line; and, by the way, Warford would look good in a Steelers' uniform about now.

Despite throwing for nearly 5,000 yards in 2011, Stafford's name is not one that leaps to mind when discussing the top tier of NFL quarterbacks. This year, he is having possibly his best year, not so much in yardage, but more so in assertion of leadership. The Lions are winning, and he is the quarterback. It's his offense.

Megatron
This week's game in Pittsburgh should be interesting for Stafford. The Steelers don't sack the quarterback, nor do they take the ball away.

Pittsburgh's secondary has had its issues, to be kind, and the two best corners, Ike Taylor and Cortez Allen, have been dinged with injuries. Do the Steelers really want to match up William Gay vs. Calvin Johnson? No.

Ike Taylor will draw that assignment, assuming he is healthy enough to play, and he will be. Ike will need help, however, and Pittsburgh's safeties have not been especially helpful this year.

Throw out last week's game vs. the Bills and an ineffectual E.J. Manuel, who shouldn't have even started for the Bills. Stafford is a better quarterback, and Buffalo has no wide receiver that remotely compares to Calvin Johnson. No team does.

Johnson, also known as "Megatron," tallied 329 yards receiving vs. Dallas earlier this season. He has 11 touchdowns, including the winning TD catch last Sunday in Chicago.

Johnson won't be the only challenge for Pittsburgh's defense: Reggie Bush as a receiver out of the backfield is a nightmare in the short passing game and as an open-field runner. "He is tough to get on the ground," Ryan Clark said on his radio show on Tuesday.

With that in mind, the defensive game plan should be simple. Stop Stafford, Johnson and Bush.

*About that Bonnie Raitt concert:
Bonnie Raitt is a living American Treasure. If her current tour comes to your city, go see her. You won't regret it, even if you've never heard one of her songs.

Later, when Cohn returned onstage to sing with her during the encore set, he said, "Every night, Bonnie Raitt puts on a master class in soul, style and sexiness."

True dat. Bonnie Raitt is not only an astonishing singer and master guitarist at the top of her game, she is sexy, sassy and stunningly beautiful. Still. Radiant.

Last but not least, she's funny. Her 64th birthday was a few days before the concert in Pittsburgh. "It was so much easier when I was 63," she said. And, at one point after drinking from the water bottle hanging on her mike stand, she said, "I've got to stay hydrated. You never know when you might want to get moist."

Yowza. Really, do yourself a favor and go see Bonnie Raitt on this concert tour, if you possibly can.
Posted by Joey Porter’s Pit Bulls at Thursday, November 14, 2013