For all their reputation as late-hitting, eye-gouging, leg-whipping, hand-biting, head-stomping, nutsack-kicking cheap shot artists, Ndamukong Suh, Nick Fairly, Willie Johnson and company are fairly talented defensive linemen. If they were in Black 'n Gold, Steeler fans would appreciate their reptilian intensity, even if tends to flicker off-and-on sporadically and backfire at times.

In the last two minutes of the game in Chicago, Fairly and Johnson were flagged for late hits on quarterback Josh McKown. The penalties kept alive a late touchdown drive by the Bears. Both calls may have been ticky-tacky-borderline questionable, but ...

Thanks mostly to Ndomukong Suh's reputation for flagrantly bad behavior on the field (kicking Matt Schaub in the nuts, leg-whipping, late hits, etc.), Detroit's defense will rarely get the proverbial benefit of the doubt. Flags fly during the games; fines are assessed afterward. During this past week, the league office fined Fairly and Johnson $15,750 each for their late hits on McKown.  The NFL has fined Suh $200,000 this year alone -- 10 games into the season.

Even Ben Roethlisberger thought it wise (?) to comment on Detroit's style of play in his session with the media on Wednesday.

"Well, yeah, you've got to be careful," Roethlisberger said. "You'll end up dead if you're not careful. This is a great D-line and defense. I tell myself all the time to be alert for those things. But then, when the bullets are flying, who knows what's going to happen?"

Notwithstanding Roethlisberger's flair for the dramatic ("You'll end up dead"!!!) and penchant for over-stating things ("This is a great D-line and defense"!!!), his point is, what? ... he may end up dead on Sunday?

Hmmmm, that would be something to see. Ben is known to be a drama queen, but dying on the 40-yard line would be taking things to the extreme, wouldn't you say? One can't help but wonder what new rules Roger Goodell would enact. 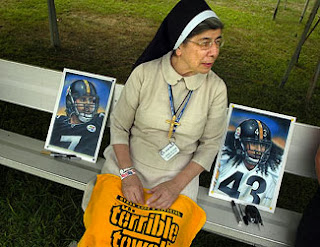 Back to reality: Detroit's defensive front seven must be licking their chops at the prospect of going up against Pittsburgh's porous offensive line, which has allowed 36 sacks this year and 99 times that many hurries and hits.

That's a rapid pace even for Roethlisberger, who has been sacked more often than any other quarterback over the past five seasons and, since 2001, has taken a whopping 379 sacks, also more than any other QB.

An anxious (Steeler) nation hopes he survives Sunday's joust with the Lions and lives to see another day.

Email ThisBlogThis!Share to TwitterShare to FacebookShare to Pinterest
Labels: Detroit