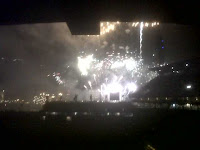 How's that headline for alliteration?!

About last evening's Fireworks Night game at PNC Park: Perhaps the bullpen was due to let one slip away ... considering that the relief corps of Jeff Karstens, Mike Crotta, Jose Veras, Joel Hanrahan, Chris Resop and Garrett Olson shut out the Colorado Rockies for 11-and-two-thirds scoreless innings Friday night.

It's a shame, though, because the Pirates last night got seven innings from Charlie Morton. Not a great start, but he gave them innings just when they needed a starter to go fairly deep into the game. That's his second innings-eating start in a row. That alone is reason for hope, especially considering the understandably low expectations most of us had for Charlie entering the season.

Although Morton surrendered five hits and five walks, he limited the Rockies to just two earned runs (three total, with the unearned run due primarily to a Ryan Doumit error). So, after two starts, Morton's ERA is just 2.08 (we're pretty sure it was well into double digits after his first two appearances last season). In any case, we're pulling for you, Charlie -- keep it going; ain't nothin' to it.

The size of the announced crowd (25,398 tickets sold) was disappointing, but it's too early in the year for Zambelli fireworks, as spectacular as they were coming off two barges in the Allegheny River.

Of greater concern, on the field, is Pedro Alvarez's continuing struggles at the plate. In 38 at-bats this season, Alvarez is batting just .184 with only seven hits and two walks against 13 strikeouts -- or about one strikeout every three at-bats, which is about the same pace he maintained last season. It's early in the season, but a bit worrisome nonetheless.

It's not so much the Ks that are troubling. Alvarez isn't getting the bat on the ball as much as you'd like to see (just one extra-base hit [a double] among his seven hits, and just one run scored).

Alvarez is pressing, and it is visible. You can see it in his face, and he looks tense at the plate. On the other hand, he's played very good defense, and he deserves credit for that. As much as he's struggled at the plate, he seems to be improving in the field, especially on his backhand and in the consistency of his throwing accuracy.

Still, he's visibly pressing at the plate. It wouldn't be a great surprise to see manager Clint Hurdle sit Alvarez for this afternoon's game, despite Colorado starting a right-hander. On the other hand, Alvarez needs to play through this slump.