More Good Signs for the Buccos, Even in a Loss 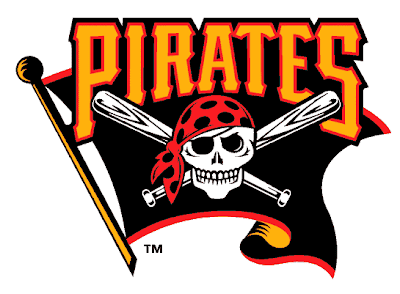 The most encouraging thing about last night's 3-2 loss in St. Louis? Good starting pitching, again, this time by James McDonald. He didn't go as deep into the game as we would have liked, but he was on a pitch count because he was coming of a minor injury incurred late in spring training. Still, the Pirates held the Cardinals to a mere three runs, with Albert Pujols driving in the winning run. No shame in that.

The other encouraging sign was the continued aggressive managerial style of Clint Hurdle. We had the impression all-time great Tony LaRussa in the other dugout actually had to pay attention, and actively had to keep up with Hurdle's moves. Hurdle seemed to be one step ahead -- little stuff, but perceptible nonetheless to somebody who's played and watched as much baseball as Joey Porter's Bulls have over the years.

We've long had the impression that in years past, LaRussa who has a reputation for unconventional tactics and over-micromanaging (new word!), was content to merely smirk smugly every time the Cardinals went up against the Pirates.

LaRussa's a great manager -- one of the most successful in baseball history -- but he's also one of those people who appears to think he's smarter than everybody else in the room (and he might be). These last 18 years, for sure, sheesh , LaRussa could pretty much go on auto-pilot against the likes of John Russell, Lloyd McClendon, Gene Lamont, et al, over in the Pirates' dugout. They just couldn't keep up, anticipate or out-maneuver LaRussa, and they didn't have enough on-field talent to out-play the Cardinals on merit. You could pretty much take for granted the Cardinals were going to beat the Pirates.

Hurdle, on the other hand, appears to be on the ball, to use a cliche (sorry, we're in a hurry). Over the past decade or so, there's been much hot-air talk in Pittsburgh about changing the mindset and approach from losing to something at least, well, more positive and upbeat. Hurdle seems to be doing that. Today's Post-Gazette has a gem of a little item about Hurdle being puzzled by naysayers carping on Neil Walker's supposed limitations (and, although it went unsaid in the article, some of those naysayers were on the Pirates' management team, including the general manager).

We love this quote from Hurdle, speaking on judgmental people quick to make snap judgments and think negatively.

"I think sometimes we are just way too quick with judgments. We want to be right. But you are never going to say, 'You know what, I was the first one wrong.' "

Love that quote. Words to live by.

We're beginning to get the impression that Hurdle isn't just some old-timey baseball guy spinning out folksy, homespun, down-home, hill-country wisdom. The more we get to know him, the smarter he looks. Smarter, even, than Tony LaRussa? Well, Mr. LaRussa would beg to differ, surely, but Hurdle looks plenty smart enough, and certainly more so than any manager we've had here since Jim Leyland.
Anyway, it was a loss last night, but not a bad, discouraging loss. Afternoon game, today.
Kevin Correia vs. Chris Carpenter. On paper, looks like a mismatch, but this ain't paper.