A Musical Interlude During the Run-Up to Super Bowl XLV: Impressions of the John Hiatt & Lyle Lovett Concert at Carnegie Music Hall in Pittsburgh 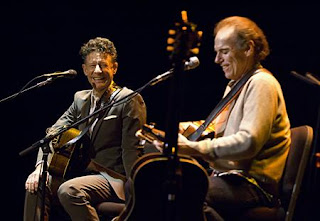 Joey Porter's Pit Bulls went to see John Hiatt and Lyle Lovett in concert the other night, and a comedy act broke out.
This show was a real treat.

Old friends that they are, John Hiatt and Lyle Lovett sang their songs individually and together, interspersed with stories, wisecracks, yarns, puns, jokes and tall tales.

At one point, Lovett, tongue in cheek, said, "It seems the whole tour has been like this. I'm not sure this is even a show. We should just issue a disclaimer at the beginning of each night: 'This is not a show.'"

Each guy -- and that's how they came across on stage, just a couple guys hanging out, playing guitar and swapping stories -- each guy sat on a chair with his acoustic guitar. No band behind them; no backup singers; no hi-falutin' electronics; no dancers; no flashy pyrotechnics, no fancy lighting, and no video backdrop. The acoustics, however, were stellar in this intimate but magnificent little theater. Very crisp and clear, but warm, too.

Throughout the evening, each guy took turns singing his songs and playing his guitar. Every once in a while, depending on the song, Hiatt would don his harmonica, strapped around his neck. As the evening wore on and Lovett sang and played his songs, Hiatt would start picking his own guitar for background harmony. After the first time this happened, Lovett said appreciatively, "Thank you for your help." To which Hiatt replied, "You didn't need my help."
Lovett is a fine guitarist, a good picker. HIatt, however, is a great guitarist, which Lovett acknowledged admiringly and graciously: "I'd buy one of your signature guitars, John, but only if it came with a guarantee that I could play like you."

The mutual compliments, wordplay and self-deprecating humor continued throughout the show. At one point, as Hiatt alluded to Lovett's "meteroric" career. Lovettt paused, then replied, "It's nice of you to say that, John. I would have described it as my 'mediocre' career, but it was nice of you."

During the course of the evening, the two discussed their respective backgrounds, including growing up -- Lovett as a Lutheran in Texas; Hiatt as a Catholic in Indiana. Hiatt told a couple of off-color stories involving childhood experiences with girls "at the tool shed," then sang a song, after which Lovett remarked, "Y'know, John, I like how you worked in one of my favorite words there in that song."

Lovett was deadpan throughout the show. He came off as smart, wry, witty, ironic, droll, gracious and absurd all at once. He was absolutely hilarious but self-deprecating. Joey Porter's Pit Bulls had no idea Lyle Lovett was so funny, and he seems like a genuinely nice guy. Just a nice guy. It seems like his heart's in the right place.

Lovett's a fine singer/songwriter, of course. And Hiatt remains in great voice, gritty and gruff, with that deep-throated, dusky, soulful voice that has remnants of the road and too much time in dark, smoke-filled places -- some of which, you get the impression, are in his soul.

The songs of both Hiatt and Lovett cover a lot of territory -- growing up, learning music, life on the road, religion, heartbreak, redemption, loss of love, found love, and hope. Eyes wide open on both these guys; time-tested, a little rough around the edges and a bit beat up; but ready for more; quick to smile, and ready to laugh. That's how they came across in this show. And very, very relaxed.

Much of the banter between songs covered the vagaries of life, including religion, sin, forgiveness, redemption and faith. At one point following one of Hiatt's songs about stealing a car (which he acknowledged that he actually did, when he was 14), Lovett asked, "How can we be certain of our faith, if we are never tested?"

Lovett then said, "See, John, now I have to change my song selection again, based on your story." ... whereupon he started playing the song, "God Will," which contains the line, "God will forgive you, but I won't."

That's just one example of how, as a songwriter, Lovett can be poignant and reflective (when he chooses to be); whereas Hiatt tends to be more bluesy and rocking, albeit with clever and powerful lyrics, as well.

Both are great songwriters and lyricists. Joey Porter's Pit Bulls are not as familiar with Lovett's songs as Hiatt's, but one thing is obvious: Many of Lovett's songs are wickedly funny in a twisted, ironic, warped-perspective sort of way -- "One-Eyed Fiona" is just one example.

Lovett seems to enjoy life in general, and the self-inflicted absurdities of the human circus in particular. He is very clever. Tom Waits and Warren Zevon (if he were alive) would fit right in with this show, as would Bonnie Raitt, whom they both know well and have played with on numerous occasions.

Here's a Lyle one-liner that wrapped up a story that dovetailed from a song: He was relating how his uncle had a knack for abusing the English language, one example being an unfortunate malaprop that somehow twisted the word "obese" inadvertently into "o'beast."

Musical highlights included, but were not limited to, the following songs:
Also, of course, the encore, which included three songs:
All in all, a good time was had by all. If you get a chance to see these guys some time, go, treat yourself. It's a fine evening of entertainment by a couple of characters who happen to be excellent musicians, master songwriters, soulful vocalists and, apparently, just regular guys who are good friends and enjoy each other's company, and one another's music.

The music just happens to be great.
Photo courtesy of Steeltownrock.com
Posted by Joey Porter’s Pit Bulls at Tuesday, February 01, 2011