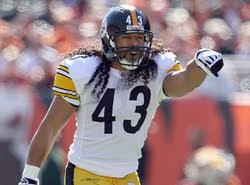 Congratulations to Troy Polamalu for being named NFL Defensive Player of the Year by the Associated Press (AP). Well-deserved, although Troy himself probably feels uncomfortable about it and would prefer somebody else would have won it.

Green Bay linebacker Clay Matthews finished second in a close vote, and the Steelers' James Harrison, who won the award in 2008, rated third in the voting this year. Hardly anybody would have squawked if either Matthews or Harrison had won it, and a strong case could have been made for several other players, including Chicago's Julius Peppers and Brian Urlacher.

A number of other players who could easily have been in the conversation didn't even get votes, so far as we know. These include last year's winner, Charles Woodson of Green Bay, and Pittsburgh's own Lamarr Woodley. Hard to believe they didn't get any votes. Ditto Darrelle Revis of the Jets.

No matter. Troy deserves the award, and everybody knows it.

The following is from an e-mail that JPPBs received recently ...

There is a 10-year-old little girl - Heather - she has Ewing 's Sarcoma. She had surgery on Monday to remove part of her lung, three ribs and part of a few other ribs.

She is recovering now but Troy Polamalu (I know you all know who he is) has been an angel in her life. She has been in and out of the hospital and when Troy can be there, he goes to see her.

They play Guitar Hero and when he's not there, he texts her.

Before Monday's surgery, Heather got a surprise from him, he sent her his jersey - signed - that he wore in the game against the Ravens.

Here are some pictures of him playing guitar hero with her. This is a very special guy, taking time out of his busy schedule to bring sunshine into this little girl’s life.