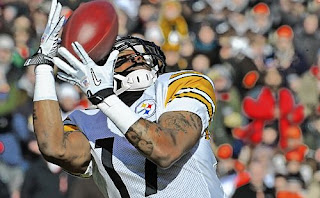 Now, it's time for the playoffs.

Time for the "Second Season"-- the playoffs, all of two huge games and, hopefully, a win in the Super Bowl.

For now, let's enjoy, reflect upon and savor yesterday's win, arguably the high note for a mostly excellent season (save for a few hiccups along the way, but never mind those).

It's always satisfying to beat the Browns, and especially in such resoundingly decisive and entertaining fashion.

Entertaining? Absolutely. From Troy's first-series interception, through the next-play bomb to Mike Wallace, to watching the evacuation of Browns' Stadium by Cleveland fans ceding their own stadium to the tens of thousands of Black-'n-Gold devotees in attendance ... yes, the game was eminently entertaining.

For those of us watching the game at home in the comfort of our living rooms, listening to the Steelers' radio-broadcast team is always entertaining. This exchange, for instance, between play-by-play announcer Bill Hillgrove and color analyst Tunch Ilkin:

Bill: "Big Ben is playing the Browns' defense like a symphony violin!"
Tunch: "He's playing 'em like a 'virch-ee-yo-see'! Is that a word?
Bill: "It is now!"

Myron would have loved it.

Tunch also described how the Browns were playing a mostly "conventionable" defensive scheme, but the most entertaining part of the day was the play on the field. Another division title sealed by big plays right and left, no offensive turnovers, zero touchdowns allowed, five touchdowns, two field goals, three interceptions, and a stellar defensive effort all-around.

About that defense: As the Pittsburgh Post-Gazette reports ...

The Steelers easily finished the regular season with the best rush defense in the National Football League and came close to finishing with one of the best in league history.

The Steelers came within 34 yards of tying the NFL's record for rushing yards allowed in a 16-game season (970), set by the 2000 Baltimore Ravens.

Some other defensive highlights this season:

• The Steelers were the only NFL team to allow just one run longer than 20 yards in 2010.

• They did not allow a 100-yard rusher all season and just one in the past 50 games.

*** *** ***
Pretty good, huh? Clearly, the Steelers had a better season than Joey Porter's Pit Bulls, who somehow declined/missed/neglected to post a single entry for the regular season (sorry about that, faithful reader(s) [?]).

In any case, the past is gone, and the playoffs are ahead.

And, hopefully, better days all around, a fine playoff run, and a Super Bowl win for the Steelers in 2011.
There's much to make us feel grateful, good, upbeat and optimistic ... and happy that we're fans of the Steelers, and not fans of the Browns.

Don't matter now. Like you said, the past is gone. And life is for the living, and the Steeler faithful are living large in 2011!