As the World Turns: The Soap Opera Continues at Pitt 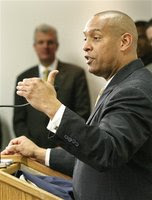 How low can the Pitt football program go? Or, to rephrase the question, how will Pitt move forward? And, just for fun, how can Athletic Director (AD) Steve Pederson defend his hiring of the now-disgraced Mike Haywood.

On Saturday, for some reason, Pitt "Chancellor" Mark Nordenberg gave Pederson a "vote of confidence," even as Pitt continues to reel from Pederson's disastrous decision to hire the Haywood -- even as unsubstantiated rumors swirl that Haywood has a history of "problems" and "issues" dating to his days as an assistant at Notre Dame and LSU.

By now, of course, everybody knows what's happened most recently with Haywood. On New Year's Eve, he was arrested in South Bend, Ind., for domestic violence. From there, the news went from bad to worse. And then, even worse. On Friday night, Haywood spent New Year's Eve in jail and appeared to be stuck there until Monday afternoon's arraignment. On Saturday afternoon, however, his New Year got even more troubling when the prosecutor decided to upgrade the charges to a FELONY. Later that day, Pitt fired him. What happens next for Haywood (divorce papers? hard time?) are his problems, and his problems alone.

Pitt has problems of its own, and they are many. Recruiting season starts in earnest today (Monday, Jan. 3), now that the New Year's bowl games are over. This recruiting season is lost, however, even before it started, thanks to this current imbroglio.

Pitt has no football coach, a shamed program, and a major PR black eye that is sure to linger. Pitt's "braintrust" must also manage countless rumors, helplessly watch as current recruits decommit, disengage the disinformation surely already being produced by competing programs, and prepare for the school's Jan. 8 bowl game vs. Kentucky in Birmingham, Ala.

Unfortunately, Pitt officials do not know for sure -- at this moment -- who will be on the sidelines as head coach or even as assistant coaches.

Dave Wannstedt, the outgoing head coach (who Pitt reportedly forced out), has a news conference scheduled for today, and speculation has it that he plans to announce whether he will coach Pitt in the bowl game.

Again, rumors are rampant -- but rumors are just one of the many problems for Pitt right now. For all we know, Wannstedt plans to announce he will coach the team -- "for the sake of the kids" -- in the Compass Bowl (whatever that is). Or, maybe not. Almost surely, however, he must be suppressing a satisfied chuckle at this latest debacle ... all the while resisting the urge to say, "See? That's what you get," while also experiencing some serious Schadenfreude.

Next in line to coach the team for the bowl game would have been Frank Cignetti, offensive coordinator. Rumor (again) has it, however, that Cignetti wants no part of the situation and plans to accept an offer to move on to Rutgers.

He (Haywood) was introduced as Pitt's head football coach on Dec. 16 by Pitt Athletic Director Steve Pederson, who referred to him as a man of "character and integrity" who had qualities that were "absolutely in line with the values of this great university."

Mr. Pederson spoke highly of Mr. Haywood's reputation as a disciplinarian who would hold players accountable and be a "good role model" for Pitt's players.

Never mind that these comments appeared by implication to be a wanton, indirect slap at Wannstedt.

Even at the time, Haywood seemed a curious choice. That is especially clear now, in retrospect, but especially in light of reports that Pederson hired Haywood although many other more experienced and arguably more qualified candidates were available.

These would include Tom Bradley, the longtime Penn State defensive coordinator, who is widely respected and known to be a great recruiter. Rumors (again) are out there that Bradley made three calls to Pederson, to express his interest in the opening before Haywood was hired, but that Pederson refused to talk to him. Why?

Bradley has waited in vain for Joe Paterno to retire, but that looks like it's never going to happen. Now, even Joe-Pa is shilling for Pitt to hire Bradley. More Schadenfreude?

Going forward, the bigger, more relevant questions are these:
So it goes, as the world turns: The soap opera continues at Pitt.
Posted by Joey Porter’s Pit Bulls at Monday, January 03, 2011

C'mon Pederson! You can't kick out a Pittsburgh native from coaching at the bowl he got the team to, especially in light of the big fat cowpie you landed the program and the alumni in with your hasty choice for his replacement. You oughta be BEGGIN' Wannstedt to coach the bowl!