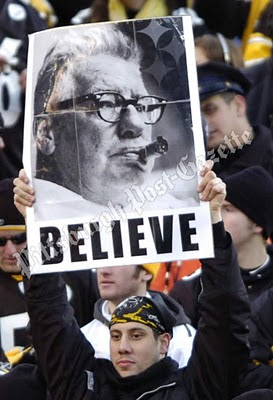 It's too soon to make assumptions, but let's do, let's do (tip o' the hat to "Blazing Saddles").

The Steelers then would host the Colts the following Saturday, 4.m., at Heinz Field.

We can count on Peyton Manning to do his annual (perennial?) post-season choke.

Let's assume, too, the Ravens (fuhget about the K.C. Griefs) and Patriots beat each other to a bloody pulp that same weekend of Jan. 16/17.

It's better than living in Cleveland.

It must be depressing to be a Cleveland Browns fan, blogger or even a mainstream-media guy like longtime reporter/columnist Terry Pluto, who offered this bleak assessment of the Clowns following Sunday's blowout at the hands of the Steelers.

Before we totally dismiss the Steelers' win over the Clowns, it's worth noting the Cleveland defense was the only one in the NFL, entering Sunday's game, to have yet surrendered as many as 30 points in a game. That's pretty impressive.

The Steelers scored 31 points by halftime.

Before the Browns fired Eric Mangini yesterday, the NFL Network aired an amusing exchange between roundtable-discussion panelists Steve Mariucci and Deion Sanders:
Regrettably, it appears inevitable that the NFL will go to an 18-game schedule. Joey Porter's Pit Bulls wish they wouldn't. Sixteen regular-season games is puh-lenty. We're ready for the playoffs. If they're not careful, Roger Goodell, the owners and the TV networks are going to slaughter the golden goose. Nobody else wants an 18-game schedule, especially not the players, and not even most fans. Maybe some bookies, casinos and advertising moguls, but nobody else.

Considering the emergence of the Steelers' young receiving corps, somebody deserves some credit for their development. Good draft choices, all, Mike Wallace, Emmanuel Sanders and Antonio Brown, so the coaches and scouts deserve credit for talent-evaluation and drafting. The veteran wide receivers (Hines Ward, Antwaan Randle-el and, for all we know, Arnaz Battle) deserve credit, too, presumably, for tutelage -- for showing these young fellas the importance of blocking, running the right routes, what it takes to succeed in the NFL, and what it means to be a Pittsburgh Steeler. Credit the young fellas themselves. They've been terrific. And, last but not least, kudos to Scottie Montgomery, the Steelers' first-year wide receivers coach, for mentoring those young receivers and helping them to develop. He must be doing something right.

In case you haven't noticed, the Steelers have won six of their past seven games, so they've built some momentum entering the playoffs. And they should have beaten the Jets, who have lost three of their past five and whose quarterback has thrown just one touchdown in their last five games.

The Jets aren't going to beat the Colts.

The Steelers will beat the Colts.

Then the Patriots (or Ravens).

And then whatever team they face in the Super Bowl.

Thanks for the road map! The Steelers will follow it all the way to their Seventh Lombardi in Dallas, and I'll follow it to the Burgh for a hometown Super Bowl bash!!