It's Christmas All Over Again! " ... an abyss of beauty that's just endless." 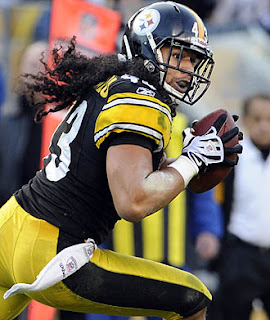 The most famous Orthodox Christian in Pittsburgh, if not the nation, has a greeting for his fellow believers today:

"We all celebrate Easter on the same day," said Mr. Polamalu, 29. Orthodoxy is the Eastern wing of the earliest Christian church, which split into the Orthodox and Catholic churches in 1054.

He and Theodora converted to Orthodoxy about five years ago. His background was Catholic and Protestant, hers Muslim and Protestant. They were Christians in search of a deeper, more consistent experience of God.

"Orthodoxy is like an abyss of beauty that's just endless," he said. "I have read the Bible many times. But after fasting, and being baptized Orthodox, it's like reading a whole new Bible. You see the depth behind the words so much more clearly."

Click here for the rest of the story. Interesting stuff.

"Kala Christougena!" to you, too, Troy and family.