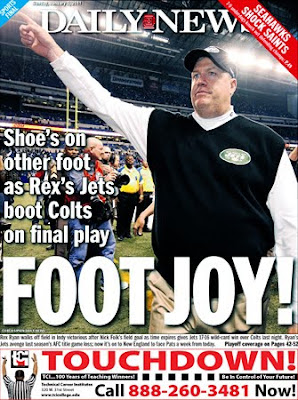 Both NFL playoff games yesterday were upsets -- which makes us glad, once again, that we don't bet football (but that's another story).

More to the point, yesterday's upsets make things ever-more interesting for the rest of the playoffs teams, as well for their fans. Like us: Steeler fans.

So-o-o-o ... Joey Porter's Pit Bulls must recalibrate our expectations for next week's game at Heinz Field.

Sheesh, we fully anticipated Peyton Manning to flop-sweat through his annual post-season choke -- but we thought it would happen next week in Pittsburgh, not yesterday on Manning's home field in Indianapolis.

It's not even so much that Manning necessarily choked. He didn't play that badly ... or did he?

Here's the thing with Manning, and we've all seen it time ana again: Manning gets to Big Games (yesterday's games, for example, as well as last year's Super Bowl, multiple post-season appearances, etc.), and he repeatedly displays a predictable yet maddening (for Colts' fans) backslide into his fatal weakness, which is ... rigidity.

Man, that dude gets uptight in big games. How else -- seriously, how ELSE -- to explain why he would target his No. 1 receiver, Reggie Wayne, just once in yesterday's game. Reggie Wayne, 10-year vet, perennial Pro Bowler, go-to receiver., second in the NFL in receptions this past season. Yesterday? Manning threw to him once. Once!

Yup: One pass to Wayne attempted for one meager completion, for one measly yard ... to Reggie Wayne, who rated second in the NFL with 111 receptions this season!???

Say what you will about Jets' cornerback Darrelle Revis (Aliquippa's own, and Pitt's too) once again playing a terrific game. Yes, Revis took Wayne out of the game and put him on "Revis Island. " Still, blame Manning and the Colts' coaching staff -- mainly Manning, we believe -- for failing to anticipate the Revis-on-Wayne coverage scheme and especially for failing to make the requisite in-game adjustments. Shame on Manning and the Colts, but it's the same old story with them. We don't care all that much, but it must be maddening for their fans.

Actually, in a way, we're happy Manning is out of the playoffs so soon. Now that Brett Favre's finally out of the picture and Manning's out of the way, who will the pathetic and sycophantic ESPN Talking Heads (Chris Berman, Adam Schefter, et al) have left to fulminate over, blubber about, slobber all over, bleah, bleah? Prime candidates: Ray Lewis, Michael Vick, Tom Brady, Bill Bellichick, Revis and even Rex Ryan, the outspoken, roly-poly blowhard, foot fetishist and head coach of the New York Jets.

Thankfully, nobody on the Steelers is likely to garner such attention, not just yet, anyway.

Now, the Steelers almost certainly will host the Baltimore Ravens next Saturday at Heinz Field. That's okay. Yeah, yeah, the Ravens first must beat the upstart Kansas City Chiefs today, but they will. And the Jets this week will prepare to travel to Foxboro, Mass, to get beat by the Patriots.

So, we'll get the Ravens on Saturday. The Ravens definitely are a dangerous team, fully capable of beating any team left in the playoffs.

So are the Steelers.