It's a Miracle in Milledgeville! 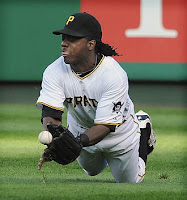 Ignore that photo above. It's from June, and that's ancient history. It's July now, and better days are here already!

Exhibit A: Lastings Milledge actually made a diving catch last night. So what if he's missed a ton of diving attempts this season. He made one last night, and it was a key play -- an ESPN highlight play no less -- in the Pirates' 2-0 (?!!) win (?!!) over the Phillies (???!).

It brought to mind his wondrous catch June 5, when he belly-flopped on the warning track in left field to make the diving catch for the snow-coned third out with the bases loaded in the ninth inning of a thrilling win over the San Francisco Giants -- and how's that for a run-on sentence?

Yes, last night, Lastings Milledge actually got a reasonably good break on the ball off the bat, took a straight-line path to the anticipated arrival point, launched into one of his patented belly-flop dives, and -- in a hold-your-breath moment -- actually came up with the ball secure in his glove. He looked as surprised as we were for a moment, but there it is. He made the catch, so give him credit.

For all the guff we give him, Joey Porter's Pit Bulls like Lastings Milledge. We want him to do well and to have fun doing it. As much as we've expressed wonder and dismay at his defensive follies, especially his uncanny ability to make diving attempts but come up just short ... we do like Milledge. We wish he'd hit for more power and play a better defensive game, but hey, look on the bright side: His average has been on the upswing for nearly a month, and now he's made another diving catch. It's all good.

Perhaps we fans could do something more to show support for Lastings Milledge. How about this -- Display a banner in a section of the right-field stands declaring it "Milledgeville."

Okay, on second thought, scratch that ... maybe the Pirates' PR department can come up with something. Oh, never mind -- bad idea.
Posted by Joey Porter’s Pit Bulls at Saturday, July 03, 2010