A Happy Fourth of July Indeed 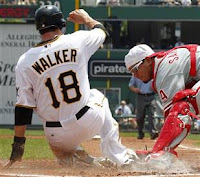 Fun day at PNC Park yesterday -- even, presumably, for the many Phillies fans attending, and even they were cool. It was actually nice to have them visit our fair city --there was no Santa Claus to boo, after all, and they were on their best behavior. And the Pirates won -- their fifth win in seven games.

So, a good day all around.

A perfect summer day, in fact, with entertaining baseball, an upbeat crowd, and a feeling of festive holiday fun. PNC Park and the city skyline looked gorgeous, as usual, the fragrant aroma of fried foods filled the air, and the Pirates won with a come-from-behind, six-run rally in the seventh inning and some fine bullpen work from new All-Star Evan Meek, Joel Hanrahan and Octavio Dotel.

The Pirates showed many promising signs of better things to come, hopefully.

With the Pirates looking at a 5-2 deficit and third baseman Pedro Alvarez walking to the plate to lead off the bottom of the seventh, this particular fan attending the game growled hopefully, "Now let's get back in it." Pedro obliged affirmatively, promptly belting a low line-drive home run carried with sudden impact and rapid velocity just to the right of the Heinz sign in straightaway center field. It was good to see, and another indication that Alvarez will be just fine, coming as it did following a lasered liner to right field earlier in the game and Alaverez's first major league home run the previous night.

This second home run was fairly no doubt, with the only question momentarily being whether the rope of a line drive would maintain enough height to clear the wall approximately 400 feet away. It did, and the Bucs were on their way.

The "Ryan Express" (Ryan Doumit and Ryan Church) followed with a single and double, respectively. After a pitching change, pinch-hitter Delwyn Young delivered a flare double down the left-field line to tie the game. Jose Tabata and Neil Walker then reached base before Garrett Jones emphatically rapped a line-drive single to bring both runners home and put the game out of reach. The bullpen sealed the deal, and everyone went home happy ... to walk the dog, spend time with family and friends, grill some food, share some laughs, ooh-and-ahh at the evening's fireworks, and then blow some stuff up.

Random thoughts:
June is gone. Forget about it, or consider it a life lesson. Sometimes you have to hit bottom to bounce back. The second half of the season is underway. Better days are here, and better days are ahead. This team has a long way to go, but it will be a fun to watch the rest of the way.
Posted by Joey Porter’s Pit Bulls at Monday, July 05, 2010