At Least We Don't Live in Cleveland 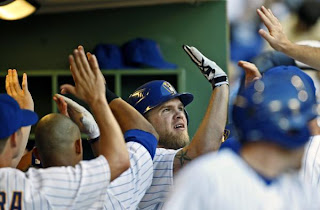 The "kinder, gentler" Joey Porter's Pit Bulls can take only so much. Following a wondrously disastrous June, we figured it was time to cut the Pirates a break. Look on the bright side, we said. So what if they were losing? They had brought up some of the young guys, and even had won five of seven games before embarking on their current road trip.

So much for optimism.

They promptly lost all three games to the dreadful Astros, and then, last night, lost in Milwaukee, 5-4, to put them 26 games under .500 for the season. The story of last night's loss was the collapse of the bullpen. As happens so often with this year's edition of the Pirates, however, there's always something else, shall we say, unique in the way they find a way to lose.

There were baserunning gaffes, of course, with Jose Tabata caught stealing and picked off, as well as a fielding error, by Ryan Doumit, plus the eight runners the team left on base. No, those sorts of things are neither unique or even unusual.

What was unique in this particular loss was something that happened in truly "only the Pirates" fashion.

As described by the Post-Gazette's Dejan Kovacevic, the Pirates "lost an apparent run in the eighth to lousy luck: Two outs after Garrett Jones doubled, Milledge grounded sharply up the middle, and it looked to be an RBI single that would have put the Pirates ahead, 5-2. But it ricocheted off the foot of second base umpire Chris Guccione and, by rule, Jones had to return to second even though Milledge got the single."

Only the Pirates. Unbelievable, but we're getting used to this sort of thing. We've come to expect it.

Then, just to pile on, there's the current edition of Sports Illustrated with a lengthy article titled, "Not a Pretty Picture," which describes the Pirates as "the most futile franchise in sports."

Whatever. One could make the case for the Detroit Lions, the Los Angeles Clippers, the Cleveland Browns, the Cleveland Cavaliers (ouch!) or anything else related to Cleveland, but at this point why quibble? G. Ogden Nutting, Frank Coonelly, Neal Huntington, et al, have created this mess, this laughingstock of a franchise, and we have to live with it (until Steelers season).

Maybe we should look on the bright side: At least we don't live in Cleveland. Just like LeBron James -- right, Clevelanders?