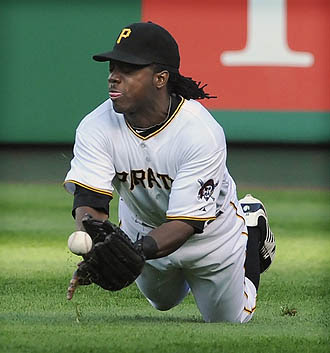 Only the Pirates could make national buffoonery-type headlines by firing a part-time racing pierogie.Joey Porter's Pit Bulls don't really have a problem with the individual players on the Pirates. Maybe half the players on the 25-man roster are legitimate major league players, and a few of those guys are budding stars. A handful are downright exhilarating and could play on any major league team.

The others? Eh, not so much. Most are borderline major leaguers.

We're taking the sanguine view here: It's not their fault they're not talented enough. They're just not good enough.

It is "corporate" management that we have a problem with, but that's fodder for another post (diatribe?).

We knew Texas was hot, and we don't mean the weather, although the temperatures apparently were as hot as the Rangers, who have won 12 straight games, including the past three over the Pirates.

As Redd Foxx said, "It was so hot, I saw a dog chasing a rabbit, and they was both walking."

Outfielder Lastings Milledge might as well have been walking last night, when he chased two fly balls that fell for a double and triple, respectively.

Just about anybody can misplay high drives, like the one Josh Hamilton hit into right-center field last night, or a tailing fly ball, like the one Michael Young popped along the right-field line. It was weird, however, how Milledge played both those hits last night.

Weird, but not atypical -- not for Milledge.

On the first -- the long, high drive hit by Hamilton -- Milledge took a typically circuitous, lurching route to the ball, appeared to lose track of it, slowed down, and then, suddenly, adjusted his angle sharply while putting on a sudden burst and then, finally, making an awkward twisting lunge -- only to watch the ball drop beside him for a double.

On the second misplay, popped down the right-field line by Young, Milledge took one of his usual tentative (initially) but desperate (late) runs toward the anticipated point of arrival ... only to slow down ... and, finally, make one of his patented belly-flop diving attempts -- only to fall flat on his face and come up short once again, as he has so many times this year.

As noted previously on this blog, Milledge does this all the time.

Lastings Milledge appears likeable. Although his arm is good -- he has five assists -- he is proving himself a defensive liability. Nor does he hit for power (still no home runs). So much for the "five-tool player" hype.

Milledge is among those many Pirates who fall in the category of "borderline major leaguer." He still has a lot to prove, and he's running out of time to do it.
Posted by Joey Porter’s Pit Bulls at Friday, June 25, 2010