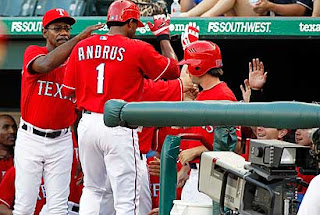 The Pirates are in a full-blown Ewt Movement, and we're cool with that. It's about time. Still, it's going to be a long rest of the season.

And they are getting no respect, nor should they.

Last night the Texas Rangers rested slugger Josh Hamilton -- who has been on fire lately -- almost as if to give him a rest because they figured they wouldn't need him against the Pirates. Well, it turns out they didn't need Hamilton, as the Rangers scored "only" 13 runs against the Pirates woebegone pitching staff.

Pirates starter Paul Maholm struggled to get out of the first inning and didn't record an out in the second.

The starting pitching has been awful all year, as Dejean Kovacevic noted today in the Post-Gazette ...

"Maybe this is a good time for a review of the starting pitchers' cumulative statistics:
Speaking of pitchers who stunk up the joint, the Pirates after the game decided they'd seen enough of recently acquired Dana Eveland, who got shelled last night and showed NOTHING after General Manager Neal Huntington brought him over from Toronto in a trade for Double-A pitcher Ronald Uviedo, who at least has some upside. Eveland was so bad he made only ugly three appearances for the Pirates.

This trade reeks of the "deal" Dave Littlefield made to acquire broken-down catcher Benito Santiago for hard-throwing relief pitcher Leo Nunez, who has since gone on to pitch pretty well in the majors and is having an excellent season as the Florida Marlins' closer.

Huntington's trade for Eveland reminds us of that situation, if only because:
Ridiculous.

"Eveland, acquired for pitching prospect Ronald Uviedo, had an 8.38 ERA and allowed 15 hits in 9 2/3 innings, including one start. General manager Neal Huntington had expressed hope at the time of the trade that Eveland would represent an upgrade to the rotation, but he ended up being a downgrade to the bullpen, as he was not nearly as effective as recently released Jack Taschner, another left-hander.
"Uviedo, 22, had been on the 40-man roster with a 3.22 ERA in 16 relief appearances for Class AA Altoona. Toronto immediately converted him to a starter, and he is 2-0 with a 4.29 ERA and a .203 opponents' batting average in four starts and one relief appearance."

The Pirates' front office should be embarrassed, but they're so full of themselves, it's doubtful they're capable of it.

Yeah, yeah, okay, injuries can happen anytime, anywhere, so it's a ridiculous thought, but still ... it's just like the Pirates. Bad juju. They're lucky Pedro Alvarez didn't get hurt playing for Indianapolis while they postponed his promotion. In any case, it's a shame for Tony Alvarez, and we wish him a speedy recovery.

By the way, we can't let this pass without comment ...

Steve Pearce played third base for Indianapolis last night. Third? Is that a first (for Pearce)? We're guessing Aki Iwamura will play third for the Indians after he arrives tomorrow.

None of it makes any sense. Iwamura has no future with the Pirates, and they have next to no chance of trading him no matter what he does for Indianapolis.

They're just wasting his time, and he's wasting a roster spot that could be used in the development of a young prospect -- if they had any. Somebody else, anyway.

Today, the Indianapolis roster listed on the team's Web site still shows no third baseman -- not one, nada, zero! -- but it does show three second basemen, three shortstops and two first basemen. What a joke.

The Pirates organization is a laughingstock, sad to say. But we all knew that.
Posted by Joey Porter’s Pit Bulls at Thursday, June 24, 2010