All is Right With the World: The Pierogie's Back! 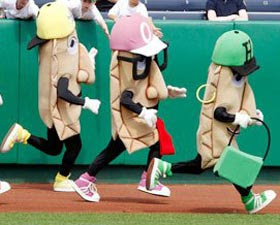 The Great Pierogie Purge of 2010 has been made right.

The Pirates have reinstated the racing pierogie they fired last week for posting a Facebook message criticizing the organization. It all seemed so silly, but now ... now, well, it just seems silly, and so-o-o-o Pirates.

When the Post-Gazette broke the news last week that the Pirates had fired the pierogie, played by 24-year-old Andrew Kurtz, it was clear that:

Our question at the time was, Don't they have anything better to do?

Now, the team's official stance is that "neither HR nor senior management were involved in the decision to fire the employee."

They expect us to believe that?

We'd prefer to consider a different scenario. We definitely envision somebody in "senior management" getting on the phone and issuing a directive like ...

"Brad? Thad? No? Tad. Whatever. All right, Tad, F.C. here, with orders straight from the top. That's right, from the top. The corner office. Listen, we want you to actively monitor the Pirates Pierogies postings on Facebook. Yeah, that's right. Facebook. You know what that is, don't you? We've seen your page, by the way, and, no, we're not friends. Monitor Twitter, too. Yeah, that's right, we want you to monitor the Pierogies' Facebook and Twitter postings.

"Any blogs they write too, and message boards. Reader forums. You'd better tap their phones, too. Did you install those hidden mikes in the restrooms? You did? Good. Now get back to work.

"No, you can't take Father's Day off to spend time with your kids. You know better than that. There's Facebook monitoring to be done!!!"
Yeah, that's probably how it went down.

Don't they have anything better to do? Apparently not.