Every Day is Sunday for the Pittsburgh Pirates 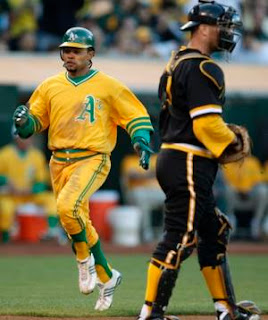 "A career night for Trevor Cahill!" bellowed the Talking Head on the MLB Network after the Oakland A's pitcher and his teammates limited the Pirates to just two hits in a 5-0 shutout win over the Bucs last night in Oakland.

This came one night after the same loudmouth blared "Unbelievable!" three times to describe the Pirates having lost 15 consecutive games away from PNC Park.

Well, now the Bucs have lost 16 games in a row on the road.

Will they make it 17 straight? ... which would align symmetrically with their 17 straight losing seasons.

Sixteen losses in a row (on the road) "only" puts them third on major league baseball's all-time list, behind only the 1990 (?) Brewers, who lost 17, and the 1985 Pirates (also known as "The Cocaine Drug Trial Pirates"), who hold the all-time record with 19 consecutive road losses (amid other distractions they had going that year).

One might ask how a major league team can lose 16 straight road games, but the more pertinent question at this point is whether this year's edition of Neil Huntington's and Frank Coonelly's Pirates will seize the all-time record of 20 straight losses on the road. Now that would be something.

That would be something to cap this already illustrious season of fired pierogies, secretive contract extensions, a 12-game losing streak, abysmal pitching, a franchise-record 20-0 loss and botched roster moves, including the Aki Iwamura fiasco, among other misadventures.

So, in anticipation of today's game in Oakland, we wonder whether Pirates manager John Russell, desperate for a win, will trot out his "Sunday" lineup, which is usually comprised of three or four backups. The question then becomes, what is the Pirates Sunday lineup, and how would you distinguish it from the "everyday" lineup?

Will Russell today find a place for deposed third baseman-turned-utility infielder Andy LaRoche? Will Jason Jaromillo start at catcher? Who among the luminaries of Ryan Church, Lastings Milledge and Delwyn Young will find playing time?

Does it really matter?

At least they've got that going for them.
Posted by Joey Porter’s Pit Bulls at Sunday, June 27, 2010