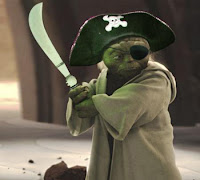 Oh, wait, we did that riff already, and only last week.

Only the Pirates could close out a loss to cap a disastrous road trip the way they did yesterday in Oakland.

Has this ever happened before? Anywhere? It must have, but, still. Wow.

Let's see: Their 4-19 record so far in June, during which they've already had a 12-game losing streak in addition to the current six-game losing streak, has brought their season record to a neatly symmetrical 25-50.

For every game they've won this year, they've lost two.

But that doesn't nearly begin to tell the story. It's the way they lose -- plus all the other crap, especially the front office mis-steps, hijinks, shenanigans, chicanery and tomfoolery -- that defines your 2010 Pittsburgh Pirates.

The Laughingstock of Baseball.

The Pirates could use a little kick-ass Yoda with The Force...

A light saber or two, also, since their bats don't seem to be working very well.