Sarah Palin as Trojan Horse, End of Days and The Nuclear Trigger 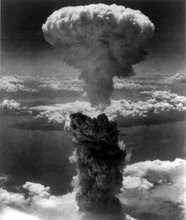 Gotta admit, the "Sarah Palin/Hillary Clinton" opening bit on Saturday Night Live over the weekend was funny and spot on. Tina Fey not only looks like Sarah Palin, she has her vocal inflections and facial tics (wink) down.

My favorite exchange from the debate:

Hillary: "I believe diplomacy must be the foundation of our foreign policy."
Palin: "And I can see Russia from my home."

Well, you gottta laugh. Even if it's nervous laughter.

Because ... we wonder who is really the Republican candidate for president this year. Is John McCain just a straw man ... and Sarah Palin the real candidate installed by the shadowy, evangelical radical right in the back rooms? Hey, just asking.

After all, McCain's 72 years old, a cancer survivor and, let's face it, hasn't looked too sharp lately. In fact, he looks downright out of it. He looks old.

And God help us all.

What worries me is that most, if not all, Pentecostalists believe in "End of Days," an apocalyptic belief in "The Rapture" whereby the good and righteous will be swept into heaven and everybody else will be left behind for the devil to torture and eventually sweep into hell.

But here's the key, and why we should all be worried that a possible "end days" believer and advocate might advance to the White House:

Now, can you imagine somebody like that with her finger on the nuclear button?
Well, if you believe in End of Days and The Rapture comes, can I have your car?

*** *** ***
Footnote: This was a bye week and we didn't have anything else to write about. Hey, cut me a break! It's been almost a month since I wrote about politics, not that the presidential election is important or anything like that. Back to football soon.

At least everyone I know will be going to the same place.
I don't want to go to hell for eternity and have to make all new friends.

But hey, hopefully the "Moral Right" freaks will be wrong about the whole thing. They will end up in hell and we end up being the good guys who end up in heaven.

For someone who says he likes to read Melville and Conrad, you certainly stooped to a new low by posting Der Spiegel's ignoramus hatchet job on Sarah Palin. Conrad, of course, wrote what is unquestionably one of the greatest pieces of Christian fiction of all time with "Heart of Darkness". Most of Melville's major characters in "Moby Dick" were taken directly from the Bible, and of course the novel itself is a meditation on fate, free will, and Calvinist Christianity.

Assuming you've actually read those works and that you're not merely a poseur pseudointellectual, you should know better than to refer to Der Spiegel as somehow authoritative in much of anything, especially when it comes to Christianity or theology. Quoting a radically secular pop publication like Der Spiegel on these matters is like quoting a Hollyweird actor on politics. You know going in that it's extremely unlikely you'll get anything halfway informed or intelligible, and even if you do, you know it's 99% guaranteed to be radically liberal.

But, since you brought it up, here are a few thoughts for you and "Anonymous".

First, I doubt highly that even today, most Germans would consider people like Martin Luther or Dietrich Bonhoeffer to be "moral freaks", quote-unquote. Der Spiegel might, but of course they're all about the Brave New World Of Secularism, and so only they have the courage and intellectual strength necessary to chart their own course divorced from Europe's historic Christianity. Blah blah, etc and so forth. If you're curious, Luther and Bonhoeffer are two of the most famous Christians in German (or world) history. But, moving right along....

Second, it is the depth of dishonesty to characterize Sarah Palin's premillenial-pretribulation strain of Christianity as somehow akin to nuclear jihadism. Such a smear is beneath even the phony secular pseudointellectuals in Germany and America, but okay. I'll play along.

For the record, what Palin and all orthodox Christians have in common is their faith in the Christ of history. That's the novel notion that---lo and behold!---the Bible has proven itself to be historically reliable and consistent with reality and that Jesus of Nazareth was a real person who is to be trusted and worshipped and followed as God and King, Lord and Savior. It is up to ignoramus secular elitists like Der Spiegel to demonstrate how and why this is NOT so, but of course they won't do that. They just resort to snarky, frat boy pseudosophisticate posturing, as though sarcasm somehow equates to scholarship and silences any and all opposition. But again, orthodox Christianity means, People whose hope is in the Christ of history.

Biblical eschatology is the study of the end of the world as purportedly described in the Books of Revelation, Daniel, Ezekiel, Isaiah, and elsewhere. Nowhere is the notion of nuclear or other jihadism advanced by or in these books, or anywhere in Scripture. (Some will object and say that the Old Testament conquest of Canaan by the Jews was a kind of jihad. A lengthier discussion on that topic might be useful, but there's not enough space here and now.) What Palin supposedly believes is, again, known as the "pretribulation, premillenial" position. Which means, the end of the world will play out over a literal seven year period (the "seventieth seven" spoken of in Daniel), a period known as "The Great Tribulation" after a passage in Revelation. Just prior to this event, all true followers of Christ will be "raptured", or instantly translated from a temporal, natural existence to an eternal, supernatural existence. "And so we will be with the Lord forever", the Apostle Paul concluded in his letters to the Thessalonians in which the "rapture" is discussed. Paul also notes that "the man of lawlessness"---that is, the antichrist---will be "revealed" when the Holy Spirit is taken up out of this world. In other words, once God removes His presence from the world in the form of Christians in whom He lives, satan and his surrogate, the antichrist, are free to work their plans to their hearts' content.

This kind of Christocentric eschatology is totally different than Islamic jihadism. Christian hope does not, nor has it ever, rested upon the notion that somehow people can force the hand of God. (Again, some wisenheimer might know enough to reference "post millenialism", or "progress", a popular view in the 19th century, which sort-of held that people COULD bring about the perfect Millenial Kingdom through their own efforts. I do not consider that view to be properly orthodox or at all supported by either history or by the plain text of Scripture.) Hope in Jesus is hope in the person and the work of the Christ of history. He "was, and is, and is to come" and keeps His own counsel. Of the timing of the Last Days, He Himself said: "No man knows the hour, or the day, not even the Son, but only the Father". Many cults have tragically begun when people refused to wait upon the God who holds history in His hands and instead tried to force the Kingdom to come.

Again, Sarah Palin's brand of Christianity---assuming she still holds to the typical pretribulation, premillenial view---DOES NOT teach what Der Spiegel claims it does. If Palin pushed the button, in other words, it would NOT be because of some twisted notion of bringing the Kingdom of God to Earth by human means. That's for Muslims like Ahmadinejad (and by the way, not all Muslims hold with him, either).

There is much more I could write, but for now I hope that in the future, you will both refrain from sophomoric, deconstructist pseudointellectualism and actually take the time to read before you join Der Spiegel's attempt to smear someone like Palin.

Woops, one mistake in my post above. It should read, "pretribulation, postmillenial", meaning, the rapture is before the Great Tribulation, and the Millenial Kingdom of Christ will come AFTER the Tribulation, NOT before.

Sorry for any confusion. I know theology can be dense sometimes.

For an "orthodox" Christian you seem to forget that a deposit of learning and sanctification of the Church comes through the magisterium and an episcopate. Last time I read the Nicene Creed that was suggested. In that deposit of learning Orthodox Christians learn that millenialist thought is a metaphor...Eastern Orthodoxy, Radical Orthodoxy and Catholicism all reject any of these literalist interpretations of End of Days--and the innovation of literalist interpretations come from "traditions" of Protestantism which posit the authority of individualistic interpretation--this is a form of Gnosticism which places the sacrality of the self in a superior position to that of the deposit of the Church's teaching: historical and contextual interpretation. Palin's Pentecostal vision, however you qualify it, believes that Global Warming is God's Will. That the Crisis of the Middle East is God's will--it excludes the possibility of human freedom and human sources of these problems.

To put Dietrich Bonhoeffer and Sarah Palin in the same post is pretty disgusting.

Also, the wide appeal of Conrad and Melville is that their stories transcend their particular and overtly "Christian" contexts to point to the wider nature of human existence. Also--there may be tinges of Calvinism in Melville, but there is also a criticism of it and a call for a deeper notion of universal brotherhood transcending the cloistered boundaries of Protestant Christianity. "Ishmael" as the saving remnant also suggests universalism. There is also homosexuality in MOBY DICK (my favorite book), and most historians and biographers agree that Melville was gay.

William: As for your "stinging rebuke" that I am juvenile and sophomoric, of course I am. That's what I do.

At least I'm not curmudgeonly and hidebound, nor am I pretentious and supercilious while simultaneously myopic and small-minded. Congratulations! You must be quite miserable.