"Sufferin' Catfish! You Can Kiss it Goodbye!!!" 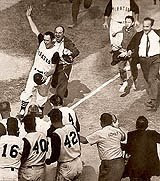 "Merry Christmas and Happy New Year," were the words with which Pirate's broadcaster Jim "Possum" Woods concluded the radio broadcast of the Bucs' epic 10 to 9 victory over the Yankees in the 1960 World Series. It happened on this date, Oct. 13, 1960.

Granted, today we're nothing like the contemporary big-budget Yankees, and we never will be. But, like Casablanca's Humphrey Bogart (Rick) and Ingrid Bergman (Ilsa Lund) will always have Paris, we will always have 1960.

Talk about living in the past. Sheesh.

Still, if you're going to have one landmark, highlight-of-highlights moment, Maz's homer is a great one to have; arguably the greatest, most dramatic World Series moment ever.

And the greatest baseball game ever played. Indeedy.

The greatest baseball game ever played. And one of the wackiest World Series ever.

"Then, of course, came the one word that continues to haunt just about every Yankee fan over the age of 55 or so: Mazeroski.

"Actually, Bill Mazeroski's ninth-inning blast capped what may well have been the greatest World Series game of all time, a 10-9 epic in which the Yankees trailed 4-0 after two innings, led 7-4 after seven innings, trailed 9-7 heading into the ninth and ultimately tied, 9-9, after a Yogi Berra RBI groundout that nearly trapped Mickey Mantle off first for the series-ending out.

"In a talk-radio world, they might still be talking about that one, because of all the twists and turns, all the iffy managerial decisions (in addition to everything else, it was Casey Stengel's last game as Yankees manager, and his performance in this game helped push that decision along). In 1960, it was enough to know that the game made Mickey Mantle, hero to millions, cry.

"I don't ever remember crying after any other game I ever played," Mickey Mantle said in a 1985 interview published in The Post, the 25th anniversary of that epic, awful Series, "but I cried my eyes out in . Thinking about it today, I still want to cry."

Coming into the 1960 Series, the Pirates were widely seen as the sacrificial lamb on the altar of a Yankee dynasty that was in the process of winning 10 of 16 World Series from 1947 to 1962.

“The sportswriters, especially those guys from , never gave us a chance,” said Bill Virdon, the Pirates’ fleet-footed center fielder on the 1960 team. “They didn’t bother to look at how we got there.”

While the Yankees, led by Mantle, Moose Skowron and the newly acquired Roger Maris, lighted up the American League, hitting a league-record 193 homers and winning 97 games, the Pirates were winning 95 games the hard way.

“This was a team that came from behind from the seventh inning on 40 times during the season,” said Groat, the Pirates’ shortstop and the 1960 league most valuable player. “We just didn’t think we could lose. And we just rode that into the World Series.”

As Mazeroski tells it, when he led off the bottom of the ninth inning with the score tied, 9-9, his goal was simply “to hit it hard, get on and get us started.”

Yankee pitcher Ralph Terry's first pitch, a fastball, was a ball, high in the zone. His next pitch was down a bit lower — right in Mazeroski’s power zone.

“He said it was a breaking ball, but it didn’t break too much,” Mazeroski said. “And this one came in chest high.”

It left the ballpark, soaring over Yankees left fielder Yogi Berra and the 406-foot sign, into the grass and woods behind the 12-foot wall, sending the Yankees into despair, the Pirates into euphoria, and turning Mazeroski into ’s hero. “Somehow, it just did something to the city,” Mazeroski said, “and they just can’t forget it."

It happens every year on this date. Fans gather at the still-standing section of the wall over which Maz's homer sailed, to celebrate the occasion. The celebration gets bigger and bigger each year. Check out the coverage in the Post-Gazette.
Also, check out a couple of nice photos in today's Post-Gazette, of the Forbes Field Wall and a fan at Home Plate under glass in the University of Pittsburgh's Posvar Hall:
http://www.post-gazette.com/localnews/panorama/
Posted by Joey Porter’s Pit Bulls at Monday, October 13, 2008