The selection of strongside/elephant linebacker Bud Dupree looks good at a glance -- or, more accurately, upon first reaction after four-and-a-half months of intense speculation, scrutiny and hand-wringing over who the Steelers might select with their first pick in this year's NFL Draft. 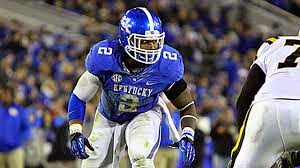 He says the right things and is said to be a high-character guy, and that is reassuring.

The video says he sets the edge, and that is something the Steelers desperately need on defense.

Crucially, he has experience dropping into coverage, and at his size, if he can cover at all, he should help with covering some of the bigger, more athletic tight ends (Gronk; etc.).

Dupree even has experience playing tight end himself, in high school, where he had 1,000 yards receiving. That suggests he can catch the ball, and interceptions are something the Steelers desperately need.

The Steelers needed to bolster their pass rush.  Oddly, however, pass rushing is not considered the strongest part of Dupree's game. Various draft observers over the past few months also noted that it is worrisome that he tended to disappear for stretches at times during games; that his game was inconsistent; that it needs polished; and that he needs to be coached up.

As long as his head is right and he has a good motor, all of those potential negatives sound like they can be fixed with coaching and him being in the right environment (as in, being around James Harrison, Joey Porter, Keith Butler and Mike Tomlin).

We should also keep in mind that while Kentucky is in the SEC, it is by no mans a football powerhouse; in fact, football has always taken a distant back seat to basketball at Kentucky. Dupree was Kentucky's best player, by far, and thus would have been targeted for special attention by SEC opponents.

Tangent: How did the Bengals pass on Dupree ... ???
How the Bengals passed on this guy is a mystery.  It gives us hope Cincinnati maybe is reverting to its past historical pattern of lousy drafting following a solid run of productive drafts over the past several years.

In fact, looking at needs of various teams picking ahead of the Steelers, we figured it was an absolute no-brainer for the Bengals -- picking at No. 21, just ahead of Pittsburgh -- to pick a pass-rusher. The Bengals tallied an NFL-low 20 sacks last year.

Dupree would have made perfect sense for the Bengals. As a "local" kid playing for the University of Kentucky, he was right there for them -- and, it appears from initial news reports, the fact they passed on Dupree has angered their Kentucky fan base, which is a huge proportion of their overall fan base.

Granted, the Bengals fortified their front seven a bit during the off-season in free agency (Michael Johnson returns from to Cincinnati after a disappointing stint in Tampa Bay), but they still have a real need for muscle in their linebacking corps.  Of the top candidates still on the board when their pick came up -- Dupree, Owamagbe Odighizuwa, Shane Ray and Randy Gregory -- either Dupree or UCLA's Odighizuwa would have made perfect sense, and either Ray or Gregory would have made Bengals sense; i.e., flaky players with a history.

Yet the Bengals went offensive tackle with the selection of Texas A&M's Cedric Ogbuehi, who gave up seven sacks in 2014 and blew out in his knee in the Liberty Bowl on Dec. 29th, meaning he may not even play in 2015.

Maybe the Bengals are thinking they won't be able to resign Andrew Whitworth to a contract extension. If that happens, we'd be happy to eventually have Whitworth on the Steelers. But we digress; that won't happen.

Enough of the Bengals. Back to the Steelers ...
With Dupree in Black 'n Gold, we can hope other good players at positions of need fall to them in subsequent rounds. The secondary must be addressed, obviously.  Nose tackle could be bolstered.

Of the first-round selections that followed No. 22, the only one that we might have been really interested in was Malcolm Brown, the Texas nose tackle who went to New England at pick No. 32.  We also liked UCLA's Odighizuwa, a lot, but the Steelers clearly liked Dupree better; and we don't have a major issue with that. We also wouldn't have objected if the Steelers had selected Connecticut's Byron Jones, the cornerback who went to Dallas.

The Jarvis Jones Question
One interesting thing about the Dupree selection: Yes, he will most likely play on the right side, in the  spot vacated by Jason Worilds.  But the selection of Dupree also may be seen as the team knowing it has to hedge its bet on Jarvis Jones.  So far, although Jones showed glimpses of playmaking ability, he has looked mostly underwhelming, and that may be an understatement. If the Steelers had faith in Jones, they may not have brought back James Harrison.

In the event Jarvis Jones doesn't pan out, however, and Harrison retires after the 2015 season, Dupree could move over to the left side.

Clearly, Dupree is being brought in to play right away, albeit on the side opposite of Jones/Harrison.  Arthur Moats resigned with the team in the hope he would get the starting job, and maybe he will start for a while at the beginning of the season.  But the position is earmarked for Dupree.

They all have hopes, and so do we, and so do the Steelers -- particularly for Bud Dupree to become the fierce and tenacious presence on defense the team drafted him to be.

One afterthought ...
It's a bit ironic, isn't it, that the Steelers passed on linebacker Shane Ray for a guy named "Bud."

With the very next pick after Pittsburgh's selection of Dupree, the Denver Broncos selected Shane Ray, who received a police citation for marijuana possession just three days ago.  Then again, marijuana is legal in Colorado, so maybe the Broncos figure it's no big deal.  Still, it is likely that Ray will start his pro career with one strike against him on the NFL's substance abuse scoreboard.

The Steelers got the right Bud.