The Baltimore Ravens are dangerous when they invoke their "victimhood" mantra ("Everybody is against us! Roger Goodell hates us!! The NFL doesn't even want us in the playoffs!!!") and espouse their "us against the world" bluster.

That's basically what we saw in the wake of the Ray Rice ugliness, when they rallied to an adrenaline-charged victory over the Steelers in the season's second game in Baltimore on Sept. 11th.

They'll try to use that rallying cry again this week, guaranteed ... except it's wearing thin and the game is in Pittsburgh this time. Also, the Ravens have been dragging their sorry asses the past couple of weeks, and it's gotta be tough for them to feel too self-righteous or excited about a shady front office guy, Darren Sanders, the team's director of security, who this week faces being charged with a fourth-degree sex crime. 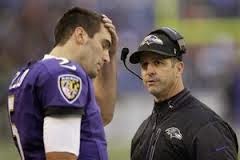 No, this time the Ravens have to travel to Heinz Field in January, and they have never beaten the Steelers in three previous playoff games.

The Steelers are waiting and ready for them -- even without Team MVP Le'Veon Bell -- and even the Ravens, as brazen and bullying and thuggish as they are, have to know it's likely to get ugly for them, and their season is going to come crashing quickly and hard to an ignominious end, with off-season finger-pointing directed particularly, we are guessing, at Joe Flacco.

If anything, it will be the Steelers who come together to rally around their injured MVP, whom we assume won't play.

The Ravens may be dangerous, but, honestly, they're not very good.

Addendum: We posted this earlier this season, before that Sept. 11th game, and just because Joey Porter's Pit Bulls can't stand Terrell Suggs, we're linking to it again: