One Big Reason the Kansas City Chiefs are 8-6 and remain in the playoff hunt is their pass rush, led by linebackers Justin Houston, who is tied for the league lead with 17 sacks, and Tamba Hali.

Allowing only 18.1 points per game, the Kansas City defense is keyed by those two pass rushers, who are relentless and have tortured the Steelers in prior meetings.

In a mid-November 2012 Monday night game at Heinz Field, Houston and Hali knocked Ben Roethlisberger out of a game with a shoulder injury, and Roethlsberger was never the same that year.

The Chiefs' outside pass rush is augmented by a good push up the middle from nose tackle Dontari Poe, who is a force. So far this year, the Chiefs defense has 38 sacks. By comparison, the Steelers' defense has 24 sacks. 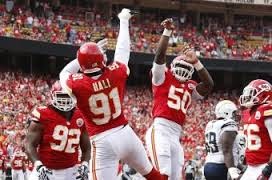 With the Steelers operating a prolific passing offense, ranked second in the NFL in passing yards, "obviously" the Chiefs will want to pressure Roethlisberger.

With that in mind, this may be a good game for the Steelers to run more -- which is something we keep saying more and more often as the season plows through December.