Under Mike Tomlin, the Steelers have a disturbingly maddening tendency to lose to or struggle with teams they should handle easily. Losing to Tampa Bay at home this year was just one glaring example.  Barely getting by Jacksonville was another.  Losing last year at Oakland, and to Miami at home in December. And too many other losses to bad teams to remunerate here.

Which brings us to ... this week's opponent, the New York Jets, J-E-T-S! Jets, Jets, Jets!! The hapless Jets, losers of eight straight.

The Jets put the "dys" in "dysfunction." They are the dysfunction at the junction.

Over his last two games, Ben Roethlisberger has thrown 12 touchdown passes -- the same number New York Jets quarterbacks have thrown in the team's past 15 games. 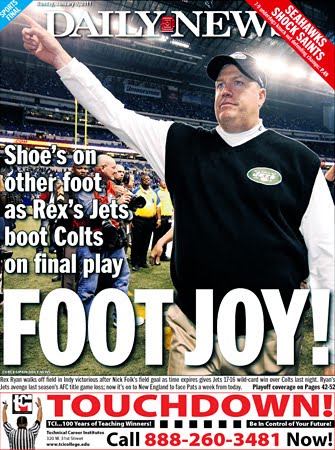 With their most recent loss on Sunday, the Jets have lost eight straight games. Head buffoon coach Rex Ryan's career coaching record is now 47-48, five years into his tenure with the laughingstock Jets.

The Jets haven't had a winning season since 2010. New York media and fans have been howling for weeks that Ryan and hapless GM John Idzik should be fired. You can read more about it at the fan-sponsored site, FireJohnIdzik.com. Or here, in a recent column by Mike Vaccaro in the New York Post, or here, or here, in any number of equally scathing columns in the New York Daily News and other outlets in the NYC metro area.

On Oct. 18, Rex Ryan said, "This season has been a big failure." Nice leadership, Rex.

Following last Sunday's loss to Kansas City, Ryan actually said of his team, "These are mighty men. I hope to hell we don't have to endure too many more losses, but we will, if that's the case."

Well, Rex, get ready to endure.

MetLife Stadium on Sunday could have more Steeler fans in it than Jets fans. It is as it should be.
Posted by Joey Porter’s Pit Bulls at Tuesday, November 04, 2014