Stick a fork in 'em. They're done.

The Steelers aren't mathematically eliminated from the playoffs, but they might as well be.

They may not win another game. Considering they lost to the 2-10 Bucs, 2-9 Jets and 4-7 Saints, how can anybody feel confident the Steelers will beat the Bengals, Falcons and Chiefs?

This was a Steelers team, mind you, that entered Sunday's game at home fresh off its bye week, against a reeling New Orleans squad that had just lost three consecutive games (all at home) and was 2-8 on the road over its past 10 away from the Big Easy. Disgraceful.

Once again, it seemed the Steelers weren't ready. Once again, they played listlessly. Maybe they're just not good enough. It is a flawed team with inadequate talent and, arguably, poor coaching by a staff that didn't have its team prepared. What other explanation could there be? 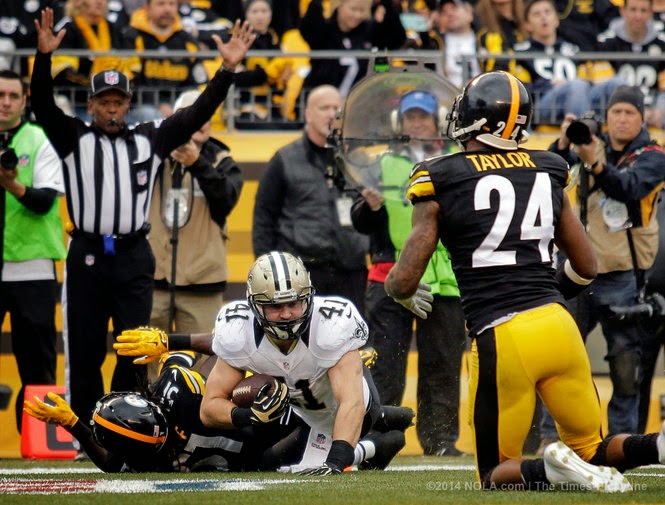 Against a team with a dreadful run defense, Ben Roethlisberger threw the ball 58 times.

Does that make any sense?

Roethlisberger's passes sailed high and wide repeatedly. He refused to blame his off-target throws on a hand or wrist injury apparently sustained in the first quarter.

Whatever, the fact remains: Pittsburgh running backs had only 22 carries, with 21 of them by Le'Veon Bell -- so much for getting Dri Archer or Josh Harris involved. Twenty-one rushes vs. 58 pass attempts. By the end of the first half, Roethlisberger had completed just 8-of-22 for 115 yards, but the score was only 14-6. There was plenty of time to run the ball.

Not to blame Martavis Bryant for things going sideways, but his second-quarter drop of a contested but catchable pass that would have gone for a touchdown felt like a turning point. The Steelers settled for a field goal, the Saints answered with a touchdown, and it was downhill from there.

Somebody name Kenny Stills hauled in five passes for 162 yards. Mark Ingram reeled off runs of 34 and 20 yards en route to his 122 yards rushing for 5.3 yards per carry. The Saints had five plays of 20 yards or more. The Steelers' secondary was horrific, and the front seven wasn't any better.

The Saints outclassed the Steelers on a day when the Black 'n Gold were honoring the 1974 Super Bowl squad. Used to be, not so long ago, the Steelers would never lose on such alumni-honoring occasions. The loss today is just another sign of how things have changed and maybe indicative that too many players on the current roster simply don't get what it means to be a Steeler.

Even the Saints' punting game was superior. New Orleans punter Thomas Morstead punted six times for 291 yards with a 48.5 gross punting average and an impressive 45.4 yard net average. Morstead's efforts included a clutch 55-yard punt in the fourth quarter that pinned the Steelers at their five-yard line. That was one of two Morstead punts that the Saints were able to down inside the 20. Pittsburgh's Brad Wing had two punts for a 37.5 yard net average, with one downed inside the 20.

Four games remain for the Steelers. They may win one or two; they may win all four. Or they may not win any. Yes, at this point, it is conceivable that the 2014 Steelers could end up with a 7-9 record.
Posted by Joey Porter’s Pit Bulls at Sunday, November 30, 2014