The Steelers have to prove today they can beat a team that is 1-8.

The last time they played a team this conspicuously lousy was Sept. 28th, when the Steelers lost -- at home -- to a Tampa Bay Buccaneers squad that had lost six consecutive games. The following week, the Steelers barely escaped Jacksonville with a narrow win saved by Brice McCain's late interception return for a touchdown. The Bucs and Jags are bad teams, as are the New York Jets.

The Steelers are riding high right now, and the Jets stink. The Steelers have to prove, however, they can win consistently, and that they can get over their tendency to play down to the level of their competition. 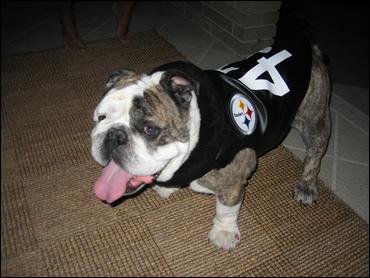 That's been a problem for them for at least the past three years. The Steelers have a lot to prove.


If you can manage it, enrich your life today by adopting a stray dog from a shelter such as the Animal Rescue League of Western Pennsylvania or Animal Friends. And, if you can swing it, try to support organizations like the ASPCA and the Humane Society.

Email ThisBlogThis!Share to TwitterShare to FacebookShare to Pinterest
Labels: Jets