If the playoffs were to start today, the Steelers would qualify for a wild-card slot as the sixth seed. Yikes.

For the Steelers, the good and the bad, the ying and the yang, the beauty marks and the ugly warts -- all were on display in last night's entertaining but, eh, frown-inducing game in chilly Nashville. Thanks mostly to Le'Veon Bell, Antonio Brown and Heath Miller, the Steelers barely got by a 2-7 Titans squad starting a rookie sixth-rounder at quarterback.

Truth be told, though, Zack Mettenberger showed many of the qualities that generated pre-draft buzz that he might merit a first-day selection in the draft. Following his bad throw that resulted in a pick-six on his first pass of the game, Mettenberger played like a legitimate NFL quarterback, with a 110.2 passer rating, 263 yards passing, no picks and no sacks taken. On a cold, breezy night with a wind chill of 16 degrees, Mettenberger's average gain per pass play was 11.0, which compares more than favorably to Ben Roethlisberger's less-than-stellar 4.9 yards per pass

It's a very good thing the Steelers controlled Time of Possession by almost two to one, controlling the ball for almost 40 minutes. The Steelers ran 73 offensive plays to Tennessee's 39, but the Titan's average yards gained per play was 8.0 vs. 5.3 for the Steelers.

The Steelers' defense is simply not a good defense right now. It needs to get some of its injured players back, but keep in mind this is a unit that allowed Mike Glennon to drive the Tampa Bay Buccaneers downfield on them late in the fourth quarter in an ignominious loss at Heinz Field.

Last night, it showed all the deficiencies that will get exposed, badly, by any offensive unit with more talent than the Titans.

As it was, last night the defense surrendered five plays of 20 yards or more.

The safeties were not good last night. Again, we ask: What did the Steelers see in Mike Mitchell?  He's late on way too many plays. And Will Allen went AWOL on Nate Washington's 80-yrd touchdown.

The linebackers, for the most part, also were not impactful. Jason Worilds is playing nothing like a big-money linebacker. Arthur Moats, who had no tackles, is just a guy.  Sean Spence looks like just a guy, although he was the Steelers' second-leading tackler ... with two individual stops. Two. Will Allen led the Steelers with three solo tackles.  Spence, Allen and Mitchell all got in on five tackles apiece, including assists. It's a good thing the Titans ran only 39 plays. 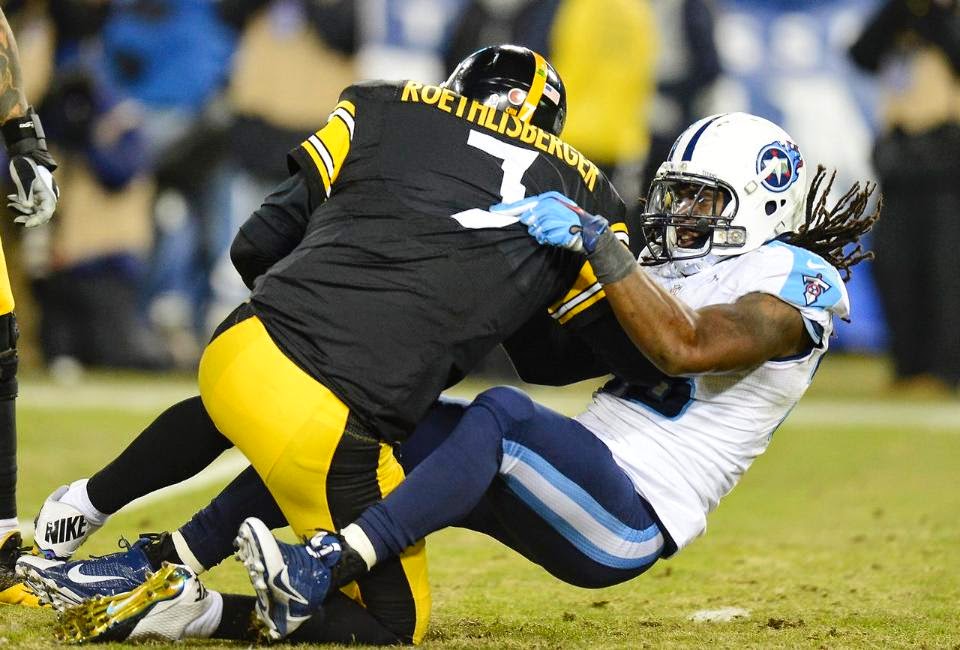 The Steelers' offensive line, meanwhile, allowed five sacks and way too much pressure up the middle. Maurkice Pouncey had his hands full, to say the least; no, that's too kind: Pouncey was overmatched and got pushed around, much like he did last week by the Jets.

Although it struggled in pass protection, the offensive line must have done something right in clearing lanes for Bell, who had 204 yards rushing. Bell may well have done much of that on his own, for all we know. He is that good.

It's a good week for the bye. There is much work to be done.