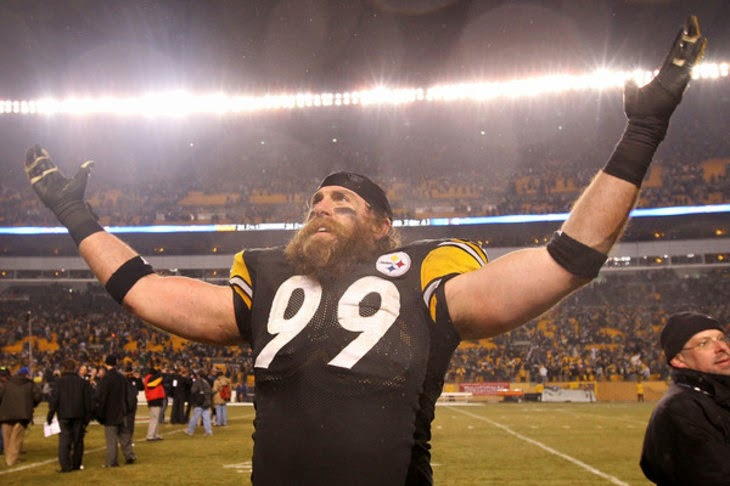 Now that it's June 3rd, and all that Lamarr Woodley cap money is freed up, it's no surprise there is rekindled talk that the Steelers are interested in resigning Brett Keisel.

It seems like a no-brainer, except for a few things: First and foremost, Keisel may not want to return at a team-friendly salary; also, Keisel is 36, and the Steelers are going younger on the defensive line.

Still, to our untrained eyes, Keisel seemed to play reasonably well last year. It would be good to have him back.

Keisel would provide a steadying presence on the defensive line the way Ike Taylor will in the secondary. Like Ike, he would get some playing time, but probably not most of the snaps. Second-round draft choice Stephon Tuitt projects as the starter, although the depth chart today shows Brian Arnfelt as the starter at Keisel's old position, right defensive end.

For what it's worth, the Steelers signed an undrafted free agent described as "a young Brett Keisel." That would be Josh Mauro, (6'6", 271), DE, Stanford, whom some people projected as a fifth-round draft choice. Another undrafted free agent, Ethen Hemer, (6'6", 285, Wisconsin), will compete for a roster spot, as will 2013 seventh-round draft choice Nick Williams (6'6", 309, Samford).

This gets a little deep, but there was one other player in this year's draft, in addition to Josh Mauro, whose style of play brings Keisel to mind for some observers. That player is Taylor Hart (6'6", 281, Oregon), who was drafted in the fifth round by the Philadelphia Eagles.  In fact, the NFL Network's Brian Baldinger described Hart this way: "To me, if I had to make a comparison now, he looks like a young Brett Keisel without the beard. He's got a promising future as a five-technique in any 3-4 defense. He broke his foot at the end of the (2013) season but he was a four-year starter. He's 6-foot-6, 280, can run and he's got violent hands."

In a roundabout way, Hart has a peripheral connection to the Steelers.  That's because, in the 2013 draft, the Steelers dealt this year's third-round choice to Cleveland for the right to draft safety Shamarko Thomas in the fourth round last year. The Browns used that third-round choice as part of a package to move up in the first round this year to draft quarterback Johnny Manziel, via a trade with Philadelphia. The Eagles, in turn, dealt that pick they got from Cleveland to the Houston Texans in a trade that landed Houston what would have been the Steelers' third-round pick this year, which the Texans used to select Louis Nix, (NT, Notre Dame). And, finally, with the fourth- and fifth-round picks the Eagles received from Houston, they selected Jaylen Watkins (CB, Florida, Rd. 4, No. 101 overall) and, yes, Taylor Hart (DE, Oregon, Rd. 5, No. 141 overall).

But today, since we're talking about Brett Keisel, we could just as easily ask, "Would you rather have Shamarko Thomas or ... Taylor Hart ("a young Brett Keisel without the beard)? ... and a fourth-round cornerback from Florida named Jaylen Watkins.  It's just hypothetical, because there is no possibility the draft would have worked out that way (for the Steelers to have those picks). If the Steelers were still on the board and Nix was available, they may have taken him. Or maybe not. Maybe they weren't sold on him at all.

For now, they have who they have, and they don't have Brett Keisel.

But that could change any day now. And over time we'll just have to see if Josh Mauro or Taylor Hart develop into the next Brett Keisel. If Mauro does, we'll say "great!" If Hart does, in an Eagles uniform, we'll say, "He should've been a Steeler!"