It's All About the Quarterback 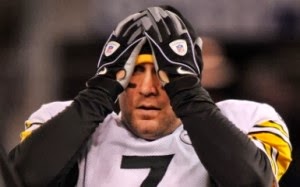 Joey Porter's Pit Bulls have long wondered why the Steelers don't run more no-huddle offense. For that matter, we have long believed the Steelers should let Ben Reothlisberger call his own plays. Ben seems to be at his improvisational best when he can wing it, so turn him loose. Granted, the running backs might get fewer than 10 carries a game, the offensive line may disintegrate, and Todd Haley may go bald and apoplectic, but what's the worst that can happen? Well, besides that?

Surely Todd Haley knows by now that when he calls plays through the headset that he might as well be ordering a pizza, for all the attention Ben pays to his play calls.

Ben seems more settled now that he's a father, and he seems to be more of a leader, too, at least so far as embracing the role of a leadership persona. Who knows? Turn him loose.
Posted by Joey Porter’s Pit Bulls at Monday, June 09, 2014