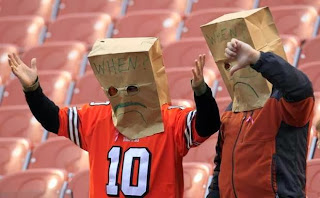 This has been what we've suspected for a long time, dating back to his days in Washington and Oakland.  If everything is perfect, the way it was so often for Campbell during his college days at Auburn, the pretty boy QB can throw a nice long, arcing pass and maybe actually complete it downfield.

Campbell showed his typical skittishness and lack of poise, however, in the first meeting with the Steelers this year, and again last Sunday vs. the Jets. For the second straight week, Campbell struggled, as the Browns’ lost, 24-13, to the Jets on the road.  He completed just 18 of 40 passes for a mere 178 yards and two interceptions. He was sacked three times. 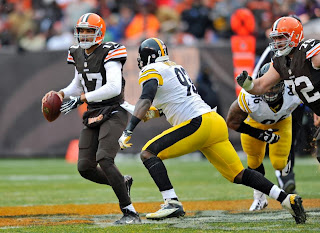 For last week's putrid effort against the Jets, Campbell received a D- grade from beat writer Dennis Manoloff of the Cleveland Plain Dealer.

Campbell's record as a starter for the Browns this season is 1-6.

The Browns may have five Pro Bowlers this year, more than the Steelers, but Campbell isn't one of them. With Campbell at QB for Cleveland, the Steelers should beat the Browns on Sunday.

If they win, the Steelers will finish 8-8. Whooppee.