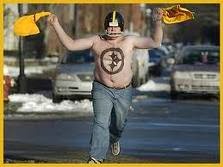 Mike Wallace burning a Steelers secondary that has surrendered an astounding 10 plays of 50 yards or more this season? Maybe. But Miami's offense, which hasn't scored 30 points yet this season, simply hasn't been able to put together a vertical game to take advantage of Wallace's speed. Why? don't know. It could be coaching design, or quarterback Ryan Tannehill's unwillingness or inability to throw deep, or the inability of a patchwork offensive line to protect Tannehill, or the ineffectiveness of Miami's running game to set up play action.

Or it might just be Wallace, and the fact that he is a hit or miss player whose performance can be maddeningly erratic.

This season, as noted by the Miami Herald,


"Wallace has only three touchdowns of any length, only two longer than 30 yards, only one on the kind of “go long” routes that open up defenses for everyone else. As far as yards per catch this season, Wallace’s 13.3 barely beats Brian Hartline’s 13.0 yards per catch."

The article containing that quote was headlined, "Mike Wallace Primed to Lead Miami Dolphins," which prompted the immediate thought, "Mike Wallace has been called a lot of things, but 'leader' isn't one of them."

We're not too concerned about Mike Wallace. We're more concerned about Miami's pass rush and ability to take the ball away (16 interceptions in 12 games).
Posted by Joey Porter’s Pit Bulls at Sunday, December 08, 2013

Email ThisBlogThis!Share to TwitterShare to FacebookShare to Pinterest
Labels: Dolphins