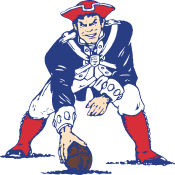 Much has been made over the years of Bill Bellichick's penchant for exploiting match-ups favorable to his New England Patriots.

He's got plenty to choose from tomorrow.

On offense, Guy Whimper ("Abdullah the Butcher") starts at right guard for the injured David DeCastro. As noted this week by the Post-Gazette's Ray Fittipaldo, "Whimper lined up at guard for the first time in training camp this summer when the Steelers had some injuries and the coaches wanted to see if he could be position-flexible."


“I’m still getting used to it,” Whimper said. “I didn’t play guard until I got here. It’s a new experience. It’s helping me out to better understand the game, looking at it from a different perspective. Playing guard and tackle is two different things even though they’re right beside each other.”

Bellichick will have various defensive players attacking the interior line, so it's not like Whimper will be going one-on-one against an individual player tomorrow.  It will be interesting to see how he handles it.

When the Steelers line up on defense, Dick LeBeau will have some tricks up his sleeve, and his schemes have given Tom Brady problems in the past (most recently two years ago). Still, Brady is 6-2 vs. the Steelers and has never lost to Pittsburgh in New England. More to the point, whatever LeBeau concocts won't matter, if the players don't play well enough.

Brady is working with a young corps of wide receivers, and the timing with them remains a work in progress. Recent games have shown a marked improvement, however, particularly with WR Kenbrell Thompkins.

Brady's main target remains tight end Rob Gronkowski, and that is a match-up that always favors the Patriots against any opponent. Coming off injury, Gronkowski returned to the active roster only two weeks ago but immediately became Brady's go-to receiver. In just two games, Gronkowski has caught 10 passes for 141 yards.