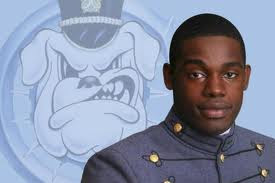 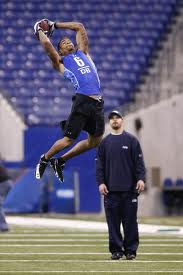 Did you know this year's NFL Draft featured a Cameron Jordan and a Jordan Cameron? Or that three NFL teams drafted players named "Cameron" in the first round. Do you know which team drafted which Cameron?

More on point: The Steelers

Granted, the Steelers' draft lacks the WOW! factor of New England's draft, or Detroit's, or Cleveland's. But it appears more than solid, especially considering that they picked No. 31 and then sat patiently for their picks throughout the entire draft, never trading up or down, but picking up some intriguing players along the way. It was a pragmatic draft. Like sensible shoes.

Although we know less about the players drafted on Saturday, they also look promising, especially the fourth- and fifth-rounders, Cortez Allen (pictured above), cornerback, The Citadel, and Chris Carter, OLB, Fresno.

Then the Steelers added Keith Williams -- and how far wrong can you go with a guard from Nebraska? -- and took a flyer on a running back, Baron Batch (no relation to Charlie), described as a "home run hitter," and there you have it: The 2011 Steelers' draft. Seven picks, straight up, no trades, no over-reaches, "no projects."

How these guys will fit in remains to be seen. The first three are easy to project:
The other corner, Cortez Allen, selected with the very next pick after Brown, is really interesting. Allen has the size/speed measurables and appears to have the intangibles and military-school discipline that already has secondary coach Carnell Lake saying this is a guy he can mold.

Allen's selection serves notice to 2009 third-rounder Keenan Lewis, who may be facing his last Steelers training camp. Lewis appears to have been surpassed already by last year's drafted corner, Crezdon Butler. Even if Cortez Allen does next to nothing this year, it will be more than Lewis has accomplished so far.

ESPN's Trent Dilfer was positively giddy over the selection of Chris Carter, who had 11 sacks (eleven!) and 16.5 tackles for loss (!) last year at Fresno. As a high-profile Fresno alum, Dilfer follows Fresno football closely, and he also broadcast at least one of the team's games last year, vs. the Cincinnati Bearcats, a good Big East team.

Of Carter's performance in that game, Dilfer said, "Carter wreaked havoc on Cincinnati's quarterback all, day, long." He also said Carter is a "dynamic first-step player" and cited his selection as yet another example of how the Steelers consistently "get it right" in the draft.

All in all, Joey Porter's Pit Bulls are okay with the Steelers' draft. In fact, it looks good, and we'd say if we thought otherwise.

Addendum: Baron Batch seems really cool. Check out his excellent blog and this article from MyWestTexas.com, where he is quoted as saying,

"They told me I have to play special teams and that they like me on third downs because of the way I block and can catch the football."
Blocking and catching? We like the sound of that.
Posted by Joey Porter’s Pit Bulls at Sunday, May 01, 2011