Buccos Let One Slip Away 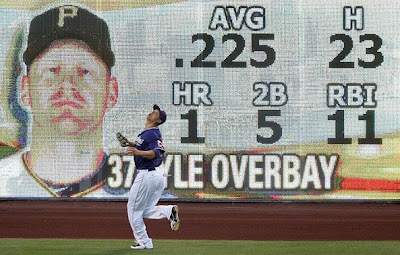 Padres outfielder Will Venable chases down a fly ball by Pirates first-baseman Lyle Overbay -- whose image and season stats are displayed on the outfield-wall scoreboard behind Venable -- in the first inning of last night's game at PETCO Park in San Diego. (photo and caption courtesy of SignOnSanDiego.com for the San Diego Union-Tribune; photo by K.C. Alfred)
As tempting as it is to examine the NFL Draft in copious detail, we have lots of time to do that -- weeks or months, in fact, until the lockout is resolved, training camp begins, and the season starts. Lots of time. We'll get to it.

Which leaves us with, well let's see ...

The Pirates let one slip away in San Diego last night. Too bad. Entering the game with a 14-15 record, they had a chance to move to .500, hold onto third place in the standings, and continue their relatively good (for them) momentum entering the game.

The Bucs got off to a decent start but were unable to hold a 5-3, seventh-inning lead against a struggling, putrid-hitting Padres team before an anemic crowd at PETCO Park, which looked much PNC Park if judging only by the size of the crowd.

(Reserve catcher Rob) Johnson’s shot into the left field stands on a full-count fastball from Joe Beimel decided the issue.

“I was I was really battling up there,” said Johnson. “Beimel gives you a lot of deception. I finally got to the 3-2 count and told myself stay back.”

Johnson’s homer set the stage for Bell, who got a further assist from Johnson when the catcher threw out Brandon Wood as the runner tried to advance from second to third with one out in the ninth on a Bell breaking ball that bounced in the dirt.
Wood had reached base on a walk to lead off the ninth, then was advanced to second on a nice sacrifice bunt by Ronny Cedeno. As announcers Greg Brown and Bob Walk debated whether the sacrifice in that situation went "against the book," Bell threw a breaking ball that bounced in the dirt and got away, briefly, from Johnson. Wood immediately broke for third, but Johnson recovered the ball quickly and threw him out.

Two outs. No word on whether Wood's effort went "against the book," but Walk defended him vigorously, saying it was a good try and that it took a perfect play to nail him, and asking, "How much better off is he at third than at second?"

Debatable, but it sure would have felt better to have Wood on second with one out than in the dugout with two outs against a guy who was going for his 41st straight save. Manager Clint Hurdle apparently felt the same way and, unlike Walk, expressed displeasure unhappy with Wood's dash.

"You're already in scoring position and if you're safe, we're all happy," Hurdle said. "But he pushed the envelope a little bit. At times you have to be smart, so when you're out at third like that, it never looks good."
Tough to argue with that. Doumit promptly struck out on another pitch that got behind Johnson -- but Doumit didn't see it and was late breaking for first. He probably wouldn't have made it in any case, but the ending was deflating. As was the loss -- a game they should have won.

With a southpaw on the mound for San Diego, it will be interesting to see which right-handed bats are in the line-up for the Bucs: Steve Pearce at third (or first, for the struggling Overbay)? Matt Diaz in left (for the left-handed Xavier Paul) or in right (in the regular platoon with Garret Jones)?

Here's more evidence that pitching coach Ray Searage is helping the pitchers, courtesy of the Union-Tribune ...

When Pirates pitching coach Ray Searage looked at 2010 tape of Correia, one thing stood out.

“He was pitching to avoid contact,” Searage said. “I told him, ‘I want you to pitch to contact. I want you to be aggressive. Go ahead and attack them with your weapons.’ Because he’s got weapons that are outstanding.

“The biggest thing you need to you, I told him, is keep the ball down. That’s all. And he’s doing it.”

Being more aggressive has resulted in fewer walks. A year ago, Correia averaged 3.97 walks per nine innings. This year: 2.0.

“I didn’t come over from San Diego and learn some magical pitch I didn’t have before,” Correia said. “I just think I learned the art of pitching.”