Back to the Sandbox, Toyland ... 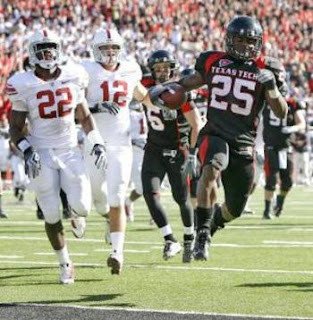 Back to the sandbox, Toyland ... in other words, sports.

Not to much to talk about today. The Pirates are hanging in there, with a record of 14-15, so that's something. At least they look more competitive than they have in recent years. It would be nice to see them keep it going and even improve.

Post-Draft Stuff
Many good collegiate players go undrafted and hope to sign as undrafted free agents. Willie Parker, Doug Legursky and many others fall into that category, and we're always interested to see which players emerge from the pack and actually make the team.

Usually, immediately after the draft, NFL teams scramble to sign 10-12 undrafted college players immediately after the draft. Not this year (because of the lockout). Normally, most teams make those calls to players during the draft to say things like, "Listen, if nobody selects you in the draft, we'd love to sign you to a contract afterwards and bring you into camp. You'll get a chance to compete!" ... which usually means most players are signed with some nominal interest to see what they can do, but in reality (in most cases) are brought in as training camp fodder.

Texas Tech running back Baron Batch had a tense wait before the Steelers drafted him in the seventh round. Writing on his blog, he tells the story of his day, which he spent with his father. Just a portion of his account follows, and it's not even nearly the best part. Read the whole thing (highly recommended, as is his "30,000 feet" story). Baron looks like an interesting guy.

Pick no.229 passed. No.230 passed as well, and shortly after pick no.231 sailed by without my name attached to it. By this time I had quit tracking the draft on my phone and sat it down, but right before I did I said a quick prayer and it went like this. “Please just put me where you want me. Amen.” I tossed my phone to the side and began watching a movie with my dad and little brother.
Not too long after I sat my phone down it began to vibrate. I glanced over to see that it was a number that I didn’t have saved in my phone; my heart began to race and with a shaky hand I answered.

It was the best phone call I have ever received.
With the 232nd pick in the 2011 NFL draft the Pittsburgh Steelers had chosen me. They chose me! It was unreal. The past 11 years of work was wrapped and packaged into one phone call.
The poor kid with nothing but a dream and a tattered map of how to get there had reached his goal. I had been drafted into the National Football League. Did that just happen?
Posted by Joey Porter’s Pit Bulls at Tuesday, May 03, 2011

Baron Batch is certainly worthy of a Steeler uniform, and they should be lucky to get him. Hopefully he will blossom into a future leader of the team.
What a guy!

HA, I was signed into my work email! The previous email was from me, not "Larry."
Maybe that could by my alias!