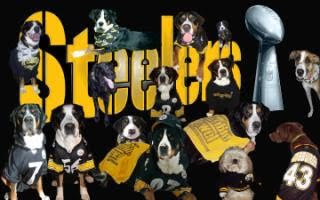 Not exactly a man-bites-dog story, but ...
The Steelers need an offensive tackle. For sure, but that's old news.

Today, the Steelers' depth chart lists Flozell Adams and Jonathan Scott as starters, with Tony Hills (?!) and Chris Scott as backups. Yikes. Somehow they made it to the Super Bowl with this crew, but still ...

The Steelers are long overdue for drafting an OT in the first round, although keep in mind this wild card: The possible return of Willie Colon, which is no sure thing (and may not be a good thing, in any case) ... and Max Starks. Given the lack of a Collective Bargaining Agreement, we don't know their status or whether the Steelers truly expect these guys to play. All we know is this: Both Colon and Starks are still on the official roster, as of today, as it is listed on the Steelers' Web site.

Presumably, Trai Essex, who is listed on the roster as a guard, could play at tackle, if needed, as could Ramon Foster, possibly. The only other tackle on the current roster is somebody named Kyle Jolly (6'6", 300, North Carolina), who was on the practice squad last year.

How well the Steelers address this problem at tackle remains an open question. It has to be a priority, though. We're just not sure they'll be able to do it in the draft. Here's why ...

It's supposed to be a fairly weak year for offensive tackles. The NFL Network's Charley Casserly, a former GM, says the best offensive tackle in this year's draft would have been the sixth-rated tackle in last year's draft. Nobody really knows. The Steelers pick 31st, so there's a good chance four, five or even six tackles will be selected by the time they make their selection. Which would mean, if you go by the opinion of Casserly and other draft gurus (namely Brian Baldinger and Mike Mayock) on the NFL Network, they'd be picking a guy the equivalent of, say, the 10th-best tackle to come available in the combined drafts of 2010 and 2011.

In any case, the tackle position is a question the Steelers have to tackle, sooner rather than later.

More generally, it's hard to predict who might be there for the Steelers at No. 31 in the first round. Everybody seems to be bandying about names like nose tackle Phil Taylor (6'3", 334) and offensive tackle/guard/center Danny Watkins, both out of Baylor, and cornerback Aaron Williams from Texas. All three are projected to go late in the first round or early in the second. Taylor and Watkins (who will turn 27! during the upcoming season) both are considered fast risers, while Williams has been projected all along as the third-best corner available (which means he might not even last until No. 31). All three could be gone, easily. Familiar names like Mike Pouncey (G/C, Florida), J.J. Watt (DE, Wisconsin, a guy in the mold of Aaron Smith, but maybe even more mobile), and Gabe Carimi (OT, Wisconsin) all will be drafted ahead of the Steelers' pick at No. 31.

Certainly, everybody would love to see the Steelers draft Mike Pouncey, but he'll be gone. Here's an option -- a poor man's Maurkice/Mike Pouncey, if you will: Florida State's Rodney Hudson, who's name hasn't been mentioned as prominently as some of the other top O-line prospects. Still, here's his profile overview on NFL.com, and it is intriguing:

"Hudson has a well-rounded, polished skill set. Should be an immediate starter at guard or center and could make a few Pro Bowls down the line. He can handle power or speed pass rushers with his outstanding balance, flexibility and wide base. In the running game, he uses great quickness to get himself into position, keeps his legs churning and finishes with authority. Only true negative is his lack of size, but he more than compensates with impressive power, toughness and in-game stamina. Hudson is arguably the finest interior offensive line prospect in this class and could hear his name in the first round."
According to Bob Labriola, writing on the Steelers Web site, Hudson was penalized only once in 832 snaps his senior season. Sounds pretty good. If the Steelers can't get Mike Pouncey, this guy sounds all right, too, for sure.

We've also read Mississippi State tackle Derek Sherrod's name associated with the Steelers, but he we've also read mixed reviews about him -- and that's what you get at No. 31. It bears repeating: It's a weak year for offensive tackles. An early run on OTs may mean only that teams are trying to salvage what they can to fill immediate needs on the O-line.

What About a Cornerback?
As much as the Steelers need help on the offensive line, they might be better served by going with the best player available, especially if it's at another position of need (like cornerback).

Speaking of corners, after Patrick Peterson (LSU), Prince Amakamura (Nebraska), Jimmy Smith (Colorado) and Aaron Williams (Texas), there's supposed to be a marked drop-off. Some draftniks (like Mike Mayock of the NFL Network) project Williams to move to safety in the NFL, which is not an indictment, given the need nowadays for safeties with strong coverage skills.

Joey Porter's Pit Bulls like Williams and would be happy if the Steelers are able to land him. It may be time for the Steelers to abandon the Keenan Lewis experiment, Ike Taylor and Bryant MacFadden aren't getting any younger, and William Gay has the look of a career nickel back, albeit a solid one. Oh, and by the way, Taylor and Gay may be unrestricted free agents (?), depending on what happens with the CBA, and MacFadden, who played well for the most part, still looks like a stopgap fill-in they picked up on the cheap last off-season.

Supposedly a Weak Year for Safeties, RBs and QBs
It's supposed to be a very weak year for safeties, and supposedly only one or two tight ends (Kyle Rudolph, Notre Dame, and a TE from Wisconsin) grade as late first-round or early second-round talent.

Ditto running backs, with Mark Ingram, Alabama, and Mikel LeShoure, Illinois, projected to go somewhere between picks No. 20-35. If we heard correctly, LeShoure never fumbled during his college career. Interestingly, as reported on CBS Sportsline, Leshoure was born in prison:

"It wasn't anything near certain that Leshoure would become 'the guy' for the Illini until fall camp last year. He's worked hard to, in his own words, 'keep growing' since he was born in prison and spent all but four years of his life without his father, who also spent time in prison."
Quarterback Question Marks
It's also a weak year for quarterbacks (after Cam Newton and Blaine Gabbert), but because so many teams need to shore up the QB position, there may be a run on QBs late in the first and early- to mid-second-round. You'd be talking about guys like Ryan Mallett, Arkansas; Andy Dalton, TCU; Christian Ponder, FSU; and then guys who are widely considered to be slightly lesser-tier options like Jake Locker, Washington; Ricky Stanzi, Iowa; and Colin Kaepernick, Nevada, who Joey Porter's Pit Bulls would love to see in a Steelers' uniform, but it ain't gonna happen). We'd be a lot more excited about Kaepernick in Black 'n Gold than we are about Dennis Dixon. We're not suggesting the Steelers will draft a QB in the first three rounds, but it's a position they should reinforce, even with Byron Leftwich returning. Will Charlie Batch even be back?

Which leaves the Steelers, where? Defensive line?
The defensive line in this year's draft is supposed to be very deep this year, and that may be where they're looking. They brought in Baylor nose tackle Phil Taylor for a visit. Corey Liuget, a NT from Illinois, also is projected as a mid- to late-first-rounder. North Carolina nose tackle Marvin Austin is another possibility.

Here's a darkhorse name (third round?) at nose tackle: Kenrick Ellis (6'5", 346) from Hampton, Va., Mike Tomlin's old school. He's been getting a bit of attention on the NFL Network as one of those under-the-radar guys who deserves a close look.

Here's a guy to keep an eye on: Ryan Kerrigan, DE, Purdue. At 6'4, 267, he's a bit of a tweener, but so was Lamarr Woodley. For what it's worth, Purdue has a long tradition of sending outstanding pass-rushing defensive ends to the NFL. By all accounts, Kerrigan has the proverbial non-stop motor, and his relentless style of play has been likened to Green Bay All-Pro linebacker Clay Matthews. Kerrigan may or may not get picked in the first round, but he won't last until the Steelers' second-round pick.

How Other Teams Might Affect the Steelers' Draft
With the lockout (no free agents are being signed), it's a tricky draft to project what other teams might do. Many of them are in flux.

The Bengals, for instance, stand to lose Carson Palmer, Chad Ochocinco and Terrell Owens. The Browns have an entirely new coaching staff. It's no secret the Cowboys (picking at No. 9 overall) need to upgrade their offensive tackle position, but they are also thought to be looking at Prince Amakamura, the cornerback from Nebraska. The Ravens (at pick No. 26) need speed at wide receiver, but they also need help at cornerback -- which would have them looking squarely at Texas's Aaron Williams, especially if they think the Steelers want him.

For what it's worth Mel Kiper's latest mock draft has Colorado CB Jimmy Smith going to the Ravens at No. 26, although Smith is reputed to have had some off-field issues. The Jets pick just ahead of the Steelers, and the Jets are known to be looking to upgrade their pass rush with either a rush linebacker, a mobile defensive end or a stout nose tackle to succeed Kris Jenkins -- which means either Phil Taylor or Corey Liuget could be plucked right before the Steelers' pick.

Then there are the Patriots, picking ahead of the Steelers with picks No. 17 and 28, and right behind them with pick No. 33. There's a good chance the Patriots will trade one or two of those picks -- but we suspect they will keep the No. 17 pick.

All of which will influence what's available for the Steelers at No. 31. Your guess is as good as anybody's.

That's all we have for today, except that ...

With the NFL Draft is just over a week away, we still can't get over the following fact, as galling as it is:

A pox on the New England Patriots.